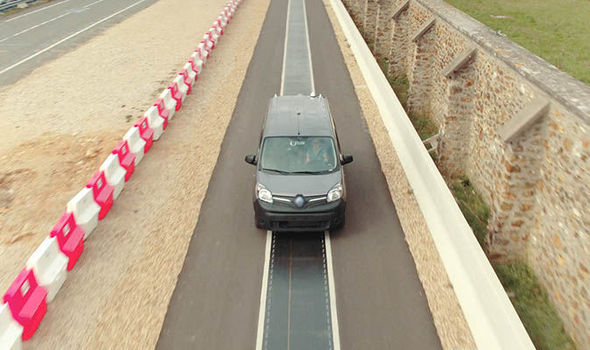 The adoption of electric cars has been slow in many areas of the world, but a new technology could soon change that. A trio of companies are currently testing out wireless charging roads, which will allow drivers of electric cars to charge their vehicles as they drive.

The Dynamic Electric Vehicle Charging (DEVC) technology is the result of a collaboration between three companies, Qualcomm Technologies, Renault, and Vedecom. DEVC will allow vehicles to charge up to 20 kilowatts of power while traveling in excess of 62 miles per hour. DEVC supports dynamic charging for vehicles traveling in both directions along the track.

The first test of the technology was done with a Renault Kangoo Z.E. The car drove along a 100-metre test track at Satory, Versailles, and further tests will seek to determine how effectively the technology allows a charge to be wirelessly transferred between the road and car. The project started in January of 2014, and will continue to explore the feasibility and sustainability of DEVC technologies through December of this year.

“Contributing to this exciting project has enabled us to test and further research dynamic charging on our Kangoo Z.E. vehicles,” says Electric Vehicle Program Director of Renault, Eric Fuenteun. “We see dynamic charging as a great vision to further enhance the ease of use of EVs, and the accessibility of EVs for all.”

Steve Pazol, vice president of Wireless Charging at Qualcomm Incorporated said that he is “immensely proud of what (they) have achieved,” and hopes that their team of experts, in collaboration with Renault and Vedecom, will allow them to “push the boundaries of the possible” in terms of electric vehicles.