GE is working on a new desk-sized turbine which can turn the tables on greenhouse gases by using CO2 to generate electricity.

Doug Hofer, steam turbine specialist at GE Global Research, is in charge of the project that will take CO2 and generate electricity out of it. Hofer explains that instead of using steam to turn the turbines, as most turbines do, the “mini-rotor” is turned by CO2.

The CO2 is pressurized and heated until it reaches a state known as a supercritical fluid, essentially the heat and pressure is so intense that the divisions between gas and liquid essentially stop existing.

The turbine is specifically designed to harness the power of this state of matter, which means that the turbines could be as much as 50% efficient at generating energy from heat, as compared to the 45% efficiency of steam turbines.

Thanks to the higher efficiency, the technology could also help power-plants reduce their greenhouse gas emissions, since more efficient plants use less fuel and emit less CO2. Normal steam systems take up to 30 minutes to crank up, the CO2 turbine might take only a minute or so, meaning it would be more useful for power generation in high demand periods.

The current prototype is a 10 MW turbine, but Hofer and the rest of the GE team hope to scale up the tech to the point where it could power a city, around 500 MW. The first tests are scheduled for later this year. 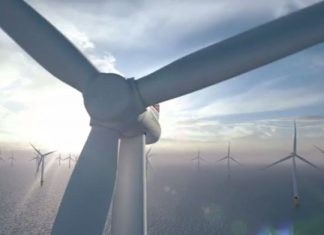 June 4, 2017
Plans are slowly brewing for a massive, 8 billion dollar, 2000 MW wind farm located off the coast of Gippsland, Australia. The project’s backers...