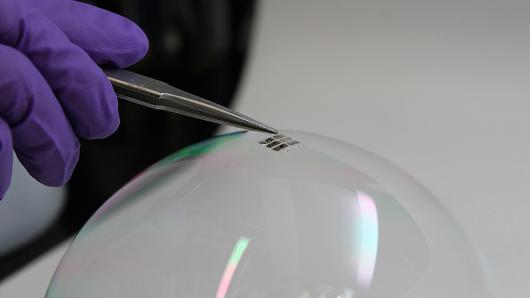 The Massachusetts Institute of Technology is attempting to make photovoltaic cells thinner and lighter than the world has ever seen.

We have seen this process before with the microprocessor; first they are put in use in highly specialized situations, then they are made as compact as humanly possible, and finally they are employed in every electronic device imaginable.

Bulović claims that as this technology matures, it can be reproduced at the macro level to power an entire building: “…start thinking about using it on (the) surface of every glass window on a skyscraper.” With the amount of infrared heat windows are exposed to every day, it is only logical that this be used to provide energy for the systems inside.

This is a continuing trend among researchers and engineers; a focus on self-reliance is evident amongst those who work with renewable energy technologies. The thought of a component or even an entire building being completely self-contained is enticing.

Simon Müller of the International Energy Agency believes Bulović and his team are working on the next generation of solar panels, and that they will play a key role in the energy sector of the future. There is even potential for growth into other areas, says Müller, with the possibility of these cells being used to create synthetic fuels being very real. Once the economic incentive to use photovoltaic cells in every day devices is recognized, there is no limit to the scope of this project.