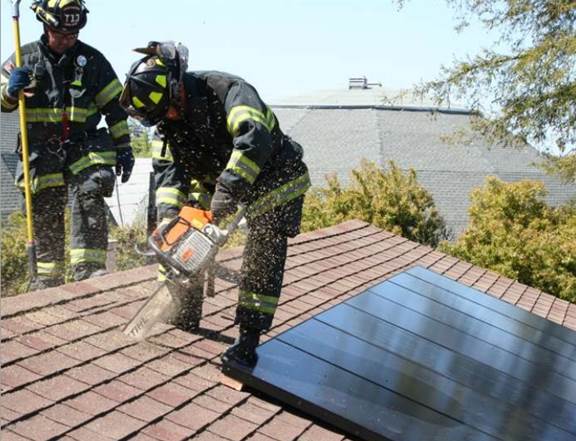 Increased adoption of solar panel-laden roofs is causing firefighters to change their methods, according to Peter Lynch of the Vermont Fire Academy.

Solar panels pose a unique threat to firefighters, as they often cut holes in the roofs of burning buildings to allow for trapped smoke and heat to escape, adding precious time to their rescue operations. They can also (obviously) generate their own electricity, a fact that makes proceeding safely on top of them troublesome.

Responders traditionally turn off the power to a household before attempting a rescue, but the self-producing nature of these devices makes that impossible at times. The newest models of solar panels have safety switches designed to turn off their collection process, but these are not standardized across the United States. For firefighters not lucky enough to deal with these new models, they can experience burns and falls as a result.

In 2011, the Department of Homeland Security began work to address the issues of photovoltaic cells as it pertains to safety. They worked on the dangers of exposure to water from fire hoses as well as electrification of the panels due to hazard lights from the fire trucks.

In 2012, the National Fire Protection Association and the International Code Council joined the efforts of the DHS to include precautions for solar panels into their fire codes. They hoped to tighten regulations regarding the installation of photovoltaic systems. These regulations included the aforementioned safety switches and providing adequate walking space for firefighters once they make it onto the roofs. The agencies also aimed to give responders clear notice that a house they are approaching was solar powered by way of visible signs.

There is still much work to be done, however, as individual counties decide which edition of the fire code to adopt. Many still use versions before the provisions for solar panels were added. These growing pains are signals that we have a long way to go in the pursuit of the future.