Charging the batteries used to power electric vehicles takes time and massive infrastructural investments by our cities and towns. So far, companies such as Tesla Motors and Continental have tackled the problems presented by EVs, but the solutions thus far have either left much to be desired or are not yet feasible.

Enter John Cushman, professor at Purdue University and co-founder of IFbattery LLC. He and his team have researched the use of membrane-less batteries to be used in electric vehicles, a method that they claim will drastically reduce the charging time while remaining safe, economical, and eco-friendly.

The process by which IFbattery’s system works is similar to how current gas powered engines operate; although instead of petroleum, the batteries use a mixture of water and ethanol or methanol to provide power. This solution of fluid electrolytes, or charged particles, contributes their stored potential electricity to the motors. They can then be replaced with fresh supply at a fuel pump. The used liquid would be sent to alternative energy plants where they would be reinvigorated with electrical potential.

According to Cushman, the existing infrastructure of our piping networks would need minimal alteration to accommodate the new solution.

While the method of using an electrolyte solution-based battery is not new, IFbattery’s system is unique in its approach: “Other flow batteries exist, but we are the first to remove membranes which reduces costs and extends battery life,” stated by Mike Mueterthies, fellow professor at Purdue and co-founder of the company.

IFbattery also claims that removing the membranes of current flow batteries also improves the safety of the operation, as the degradation of the material contributes to battery fires. Cushman points out, “IFbattery’s components are safe enough to be stored in a family home, are stable enough to meet major production and distribution requirements and are cost effective.” 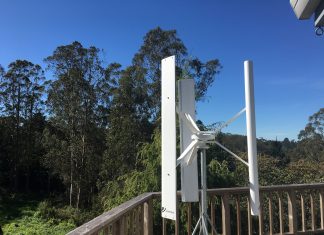 July 9, 2017
The first time you see a Nemoi wind turbine, you may not realize it’s a turbine at all. A white and silver metallic structure...