The Azraq camp for Syrian refugees in Jordan has become the first ever “clean energy refugee camp”. The camp is now powered by a 2-megawatt solar plant set up by the UN’s refugee agency, UNHCR.

The solar plant can currently provide sustainable cheap energy to 20,000 Syrian refugees at the camp, though UNHCR is planning on upgrading the plant from 2 to 5 Megawatts, which would enable to plant to meet the needs of another 15,000 people and meet all energy needs for the camp.

The plant was built by Jordanian firm Mustakbal, and according to them, the plant will produce around 3.6 million kilowatt hours per year, cutting 2,370 tons of CO2 emissions.

The solar power will make life easier for refugees in the camp, which suffers from harsh conditions like overpowering heat and dust storms. UNHCR has said that until very recently, the refugees in the camp only had intermittent access to electricity.

“This made daily activities difficult, such as cooking, washing the clothes, studying, walking safely to the washroom at night – especially for women and children,” UNHCR said. UNHCR goes on to say that while electricity was not usually thought of as necessary for refugees, it “impacts their security, health, education and helps to improve the quality of life away from home.” For instance, the Azraq camp’s lack of lighting was dangerous because of scorpions, snakes, and packs of wild dogs in the area. According to UNHCR, each family in the camp can now install a fridge, fan, TV, lights in their shelter, and charge their phones which are necessary for keeping in touch with relatives abroad.

The solar project also has implications for Jordan as a whole. Jordan does not have the oil reserves that other Gulf States have, and as a result struggles with supplying electricity to its citizens. 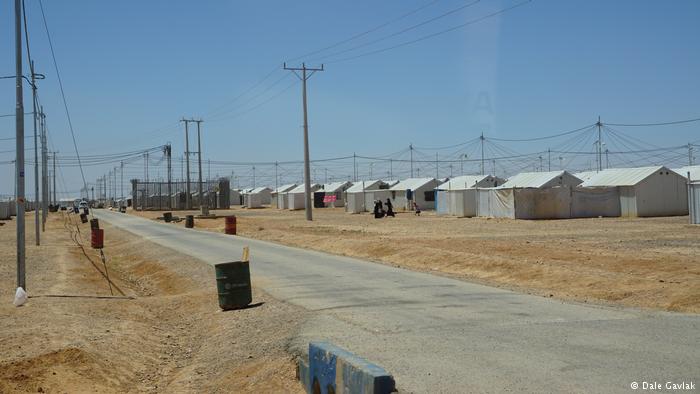 Ala Qubain, the Mustakbal engineer who oversaw the project says that it has taken a long time bring renewable energy to Jordan, but that the effort has been worth it and that they are starting a trend.

“Since three or four years, the legislation was developed to develop renewable energy plants in Jordan,” said Qubain. “Maybe it could have happened before, but we should be proud compared to the Gulf and the region around Jordan. We are at the beginning of the curve.”