Though winter days are typically less windy, a new analysis shows turbines actually work harder and produce more energy on the coldest days, when the power demand is highest.

The study recently published in the journal Environmental Research Letters shows that on the very coldest days in Great Britain, turbines typically produce more power than the average winter day.

Usually warmer weather in Great Britain brings more wind, and colder periods are calmer with an increase in energy demand during cold periods as well. It was thought that wind turbines produced the least amount of energy when demand was highest, but the study done by scientists from the Met Office Hadley Centre, Imperial College London and the University of Reading suggests that during the highest five percent of energy demand days, more than a third of those days had above-average wind power generation.

The study also found that during high demand cold days, capacity from turbines decreases by an average of a third, only the highest demand days saw an increase in power generation. The researchers suggested that strong easterly winds typically present on the coldest days explained the phenomenon. The research also suggested that spreading turbines around Great Britain in strategic areas would make the most of the varied wind patterns associated with the coldest days, and thus maximize the power generated during peak demand times.

“The very coldest days are associated with a mix of different weather patterns, some of which produce high winds in parts of Great Britain,” says Hazel Thornton of Met Office Hadley Centre, one of the paper’s authors.

Thornton expands upon the weather patterns:
“For example, very high pressure over Scandinavia and lower pressure over Southern Europe blows cold continental air from the east over Great Britain, giving high demand, but also high wind power. In contrast, winds blowing from the north, such as happened
during December 2010, typically give very high demand but lower wind power supply.”

“A wind power system that is distributed around Great Britain is less influenced by low generation on cold, still winter days: low wind in one region tends to be compensated by wind elsewhere,” says Brian Hoskins, another author of the paper, of the University of Reading and Chair of Imperial College London’s Grantham Institute. “The average drop in generation is only about a third, and is generally smaller than this on the really cold days.”

The study also notes that during high demand periods, offshore wind power is a more secure energy supply compared to onshore wind, due to offshore wind being sustained at higher levels. 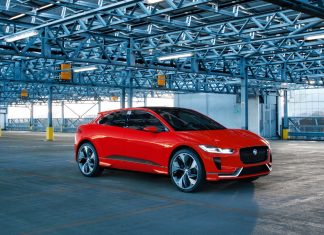 July 6, 2017
Jaguar is taking on Tesla with it's first electric car that happens to look a little like, well, a Tesla - but chunkier. Still firmly...