A newly released report by the Office of Government Ethics states that several energy companies tied to Oklahoma, including wind power companies, helped make Donald Trump the billionaire he claims to be.

Amongst the companies listed in the OGE report were Exxon Mobile, General Electric, Burlington Santa Fe Railroad, Phillips 66, Halliburton, and NextEra. The report says that the money was made through various investments, dividends or interest, amounting to a total of between $97,009 and $245,000 made by Trump from the companies in question.

One company that stands out from the rest, however, is NextEra. NextEra is a wind energy company based out of Florida, which has more than 100 wind farms all across Oklahoma and is also the subject of several lawsuits within Oklahoma.

This is intriguing considering that Trump has repeatedly come out against renewable forms of energy, often citing arguments from people like Continental Resources’ Harold Hamm, who was an advisor to the President’s campaign.

“The wind kills all your birds. All your birds, killed. You know, the environmentalists never talk about that,” Trump said while he was on the campaign trail back in August. However, as we recently reported, studies show that fossil-fuel based plants kill 2,000x more birds than wind farms.

“To begin with, the whole push for renewable energy is being driven by the wrong motivation, the mistaken belief that global climate change is being caused by carbon emissions. If you don’t buy that – and I don’t – then what we have is really just an expensive way of making the tree-huggers feel good about themselves,” wrote Trump.

The president has also considered large cuts to the Office of Energy Efficiency and Renewable Energy’s budget. Trump is proposing allotting only $636 million for use by the OEERE in 2018, which would be a massive 69% cut down from their $2 billion budget in 2017. These cuts would also correspond with a proposed 93% cut to the Advanced Research Projects Agency, a 56% cut to the Energy Department’s Fossil Energy and Development program, and a 28% cut to nuclear power. 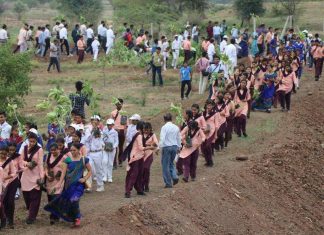 July 4, 2017
Recently, the Indian State of Madhya Pradesh was home to an extraordinary event. This past Sunday millions of people gathered together to plant over...