This coming Tuesday, construction will finally begin on the largest solar wind farm in Missouri.

The 72-acre wind project located in Nixa was delayed for many years, but thankfully all is now ready to begin. Ground will be broken on the large 33,000 solar panel installation on Tuesday. Gardner Capital is developing the solar project.

Jon Miller, Gardner’s director of solar investments, says he anticipates the Nixa solar farm to be up and running by December, and that it will be able to power around 1,800 homes.

The city of Nixa will be purchasing all the power generated by the solar farm, which will provide around 9% of the city’s yearly power needs, according to estimates.

According to Nixa city officials, the project will end up saving the city around $2.5 million over the lifespan of the 25-year long contract. 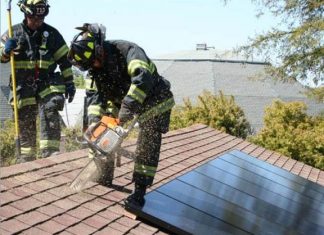 June 4, 2017
Increased adoption of solar panel-laden roofs is causing firefighters to change their methods, according to Peter Lynch of the Vermont Fire Academy. Solar panels pose...