A group of researchers at the University of Virginia are in the process of creating the largest wind turbine in the world. The turbine will stand at 500 m (1640 ft) tall, which is a 1/3rd mile high and approximately 57 m (187 ft) higher than the Empire State Building.

Wind turbines have been increasing in size and are already substantially larger than they were 15 to 20 years ago, with a typical turbine being around 70 m (230 ft) tall with blades about 50 m (164 ft) long. The energy output of the average turbine depends upon their size and height but generally ranges between 1 to 5 MW (enough power for around 1100 homes).

According to John Hall, assistant professor of mechanical and airspace engineering at the University at Buffalo, the primary motivation for building larger wind turbines is an economic one. Larger turbines are simply more cost-effective because wind tends to blow stronger and more consistently at greater altitudes. It is thus possible to capture more energy with a tall structure. Longer turbine blades also grab wind more efficiently, and the taller the tower the longer a blade can be. If blade length doubles, a turbine system could produce four times as much energy as it currently does.

Eric Loth is the leader of a gigantic turbine project, which gets its funding from the U.S. Department of Energy’s Advanced Research Projects Agency–Energy (ARPA–E). Loth and his team are trying to create a 50 MW turbine system with blades 200 m (656 ft) long, estimated to be 10 times more powerful than existing wind turbines. The team will be lowering the amount of blades to two instead of the usual three, cutting costs and lowering the weight of the structure. While the reduced number of blades would typically make a turbine less efficient, the team is using an advanced aerodynamic design which essentially makes up for those losses.

Loth’s team thinks that the gigantic structures will be placed 80 km (50 miles) offshore, where winds tend to be stronger. To deal with intense storms, the blades of the turbine can actually change direction with the wind, similar to a palm tree.

“When the blades bend back at a downwind angle, you don’t need to build them as heavy or strong, so you can use less material,” explains Loth. “The blades will adapt to high speeds and start to fold in, so there are less dynamic forces on them… We’d like our turbines to be able to handle higher than 253-kilometer-per-hour winds [160mph] (in non-operating conditions.)”

The system would shut down in winds above 80 to 95 kilometers per hour (60mph), and the blades would begin to bend away from the wind.

Loth and his team have not yet tested a prototype, they are currently still designing the turbine’s construction and control systems. Next summer the team will construct a smaller version of their turbine, with two 20 m (65 ft) blades which will be tested in Colorado. Loth says he understands the risks and difficulties associated with the project, and though it may not become a reality, it is still worth trying.

“This is a very new concept, so [there are] definitely no guarantees it will work,” Loth says. “But if it does, it will revolutionize offshore wind energy.” 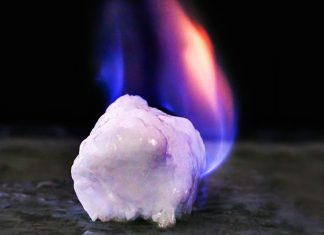 July 19, 2017
As the world warms, methane trapped underneath the frozen tundra could be released, increasing the rate of warming in a vicious circle. Runaway global warming...