China has recently started construction of a “forest city” based on the city of Liuzhou in southern China. The project will be run for two-thirds of a mile along the Liujiang River and will involve the planting of more than a million plants and around 40,000 trees all over apartments, offices, schools, and hotels in Liuzhou.

The green buildings will absorb urban air pollution and produce oxygen in turn, boosting additional local biodiversity. The city will be designed so that the greenery will also let residents use less heat and electricity, by providing shade on sunny days and insulation during the winter.

The Liuzhou buildings will be designed by Stefano Boeri Architetti, which is the same architecture firm responsible for two other “vertical forest” buildings currently being planned for Ninjing, located in eastern China. The development will host around 30,000 people when it is completed. It will be connected to the main city of Liuzhou, which has a population of about 3.8 million people, thanks to a fast-rail line to be used by electric cars.

The development is a small but important effort to fight the pollution which overpowers many of China’s most industrialized cities, and it comes just as China is pursuing a serious transition to renewable energy sources instead of fossil fuels.

According to the architects, the forest city will absorb around 10,000 tons of carbon dioxide along with 57 tons of fine dust pollutants every year and produce around 900 tons of oxygen in exchange.

The city is expected to be completed by 2020. 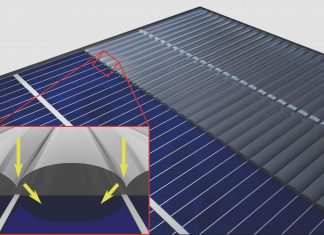 July 8, 2017
An invisibility cloak has been used in the lab to hide the metallic strips used in solar panels, making the devices more efficient at...