Researchers at the Energy Safety Research Institute at Swansea University in the UK have discovered a way to remove pollutants from water using solar power. The researchers, led by Dr. Charles W. Dunnill and Dr. Daniel Jones, have managed to create a new non-toxic substance that, when released into bodies of water, uses solar energy to eliminate harmful pollutants from synthetic dyes.

According to a report published in the journal ‘Scientific Reports’, almost 300,000 tons of pollutants are spread throughout bodies of water each year. The new substance developed by the Swansea University team absorbs more than 90% of the dye and augments the rate the dye breaks down tenfold, through the use of visible light.

The substance is created by creating ultra-thin “nanowires” out of tungsten oxide on the surface of tantalum nitride particles. The reaction mixture is then held within a high pressure sealed container.

After the nanowires develop, the material breaks down the dye compounds into much smaller and harmless molecules through solar energy, which is a process called “photo-catalytic degradation.” Once the dye is removed, the catalyst can just be filtered out of the water and then reused.

Using sunlight to breakdown dyes has been researched for decades now, but only recently did researchers have access materials capable of absorbing the visible part of the solar spectrum. Technically, other materials like titanium oxide could also break down dye compounds using solar energy, but they can only absorb ultraviolet light, so their efficiency is rather limited.

With materials that can absorb a greater range of the light spectrum, the researchers were able to develop a process that removes pollutants at a much quicker and more efficient rate. 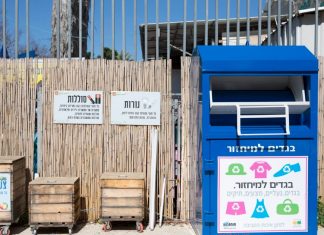