Home Autos Tesla Delivered 22,000 Cars in Q2 With June Being Their Best Month... Tesla delivered more than 25,700 Model S or Model X vehicles during the second quarter of the year. Deliveries for the Model X were 10,000, lower than last quarter’s 11,500 deliveries. Meanwhile, deliveries of the Model S fell to 12,000.

June started off poorly for the company, with production averaging about 40% below demand. The reason for this was a severe production shortfall of 100 kWh battery packs. However, once this issue was resolved, June orders and deliveries picked up considerably, ranking as one of the best months in Tesla’s history.

Tesla says that they are confident that combined deliveries of the Model X and S in the second half of the year will exceed sales of the first half of the year, providing global economic conditions stay stable.

“We always want our customers to experience the newest versions of Model S and X while their cars are in service, so we added fully loaded, newly built cars to our service loaner fleet. We always want the service loaner Tesla to be *better* than the customer car being serviced. The customer should never suffer for something that is our fault,” Tesla said in the report.

Tesla started production on the Model S back in June of 2012, while the Model X started production in September of 2015. Tesla does not modify their vehicles on a yearly basis, like other automakers, but instead continually adds small updates to their vehicles. Tesla has recently installed a new seating configuration on the Model X, and in January of this year they produced Model S and Xs with a 100D battery option.

This is the last delivery report before the Model 3 releases. The first thirty Model 3 customers will receive their keys at a launch party scheduled for July 28th. 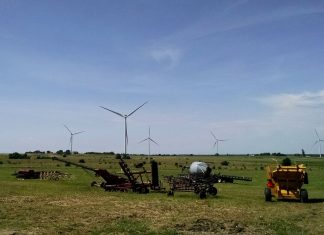 June 6, 2017
Oklahoma saw the dedication ceremony of a new wind farm last Wednesday outside of the Northern town of Blackwell. The plant began producing power...