Home Autos Jaguar Races After Tesla With Electric Car of Their Own (17 Pics...

Jaguar is taking on Tesla with it’s first electric car that happens to look a little like, well, a Tesla – but chunkier.

Still firmly in “concept” stage, the I‑Pace is expected for launch in late 2018.

There’s a huge focus on the styling and extras. The “luxury status” of the vehicle, you could say. And it’s very pretty.

Jaguar has gone for what it calls a “dramatic, distinctive look”, with features like an aerodynamic bonnet scoop, flush door handles and “bold” air ducts to increase range an efficiency.

On the “luxurious yet sporty” interior you’ll find a floating centre console and panoramic roof. Jaguar says the lack of combustion engine or transmission tunnel means extra space in the cabin, so there’s plenty of room for five people and a lot of bags.

There’s four screens – two infotainment touchscreens in the centre console, one behind the steering wheel and – get this – there’s a full-colour Heads Up Display projected onto the windscreen. I love the future.

Looking beyond aesthetics, though, here’s what you get for your probably-a-lot-but-we-don’t-know-exactly-how-much-yet dollars.

So what’s on offer? 700Nm instant torque, 294kW and 0‑100km/h in around 4 seconds, with zero emissions. That’s basically all we’ve got info on outside of how it looks and all the fancy touchscreens.

What we don’t have solid details on are, well, everything else. Specifically:

Modern, premium battery electric vehicles, including I‑PACE Concept, can have a range of over 500km. So range won’t be an issue for most drivers, especially with a growing public infrastructure of charging points.

Final pricing will not be confirmed until closer to the launch of I‑PACE. Whilst electric propulsion systems can be twice as expensive as conventional systems, we assume I‑PACE will be priced 10-15 per cent above a similarly powered and equipped Jaguar F-PACE. 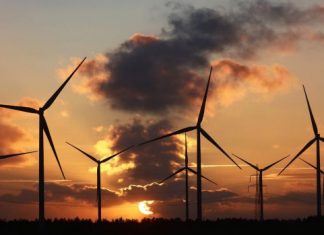 June 1, 2017
The clean energy sector in Australia is recovering from recent setbacks and looking forward to a record year for new wind and solar farms....