A new system for analyzing data can reveal how much consumers will pay for energy costs over time and the news is good for electric cars: The battery-powered vehicles could rival traditional internal combustion engines as soon as five years from now. Researchers at Imperial College London published their findings on Monday in the journal Nature Energy.

“This new analysis reveals that with reasonable investment, energy storage technologies could soon become much cheaper, with electric cars leading the way as battery technology costs fall,” the researchers write.

Here’s how the researchers came to their findings: Pulling from a massive database on cumulative installed capacity, current cost, and future investment, the team looked at installed capacity and prices of several energy solutions, and then tracked their movement over time to assess how fast costs may fall depending on investment. The system is unique as it can factor in the long-term costs associated with wind and solar energy, which only produce power intermittently and therefore depend on battery cost savings to become cost efficient.

“Energy storage has been recognized by leading figures such as Barack Obama and Bill Gates as one of the key technologies of a low-carbon 21st century,” says Oliver Schmidt, study lead from the Grantham Institute and the Centre for Environmental Policy at Imperial. “With this analysis tool we can quantify when energy storage becomes competitive and identify where to invest to make it happen, thereby minimizing investor and policy uncertainty.”

The uncertainty around the cost of batteries means that it’s hard to say for sure when electric vehicles will become more cost effective than current cars, but the researchers give a range of as early as 2022 and as late as 2034.

Part of the disparity depends on how quickly consumers adopt newer low-cost electric vehicles like the Tesla Model 3. The company’s $35,000 car, which entered production this month, undercuts the company’s existing $68,000 Model S by a significant margin. The company’s Gigafactory in the Nevada desert, which will produce batteries faster than bullets leaving a machine gun, is set to aid in the company’s bid to drive down battery prices and overall car costs.

The tool also shows how investment levels can affect other forms of energy. While the British government is spending $1.29 billion on a new Hinkley Point nuclear plant to produce 3.2 gigawatts of power, that same investment would be enough to deliver between 21 and 41 gigawatts of lithium-ion battery storage, more than ten times the country’s current electric storage capacity.

“This tool allows us to combat one of the biggest uncertainties in the future energy system, and use real data to answer questions such as how electricity storage could revolutionise the electricity generation sector, or when high-capacity home storage batteries linked to personal solar panels might become cost-effective,” Dr Iain Staffell, co-author of the study, from the Centre for Environmental Policy, said.

Electrical energy storage could play a pivotal role in future low-carbon electricity systems, balancing inflexible or intermittent supply with demand. Cost projections are important for understanding this role, but data are scarce and uncertain. Here, we construct experience curves to project future prices for 11 electrical energy storage technologies. We find that, regardless of technology, capital costs are on a trajectory towards US$340 ± 60 kWh−1 for installed stationary systems and US$175 ± 25 kWh−1 for battery packs once 1 TWh of capacity is installed for each technology. Bottom-up assessment of material and production costs indicates this price range is not infeasible. Cumulative investments of US$175–510 billion would be needed for any technology to reach 1 TWh deployment, which could be achieved by 2027–2040 based on market growth projections. Finally, we explore how the derived rates of future cost reduction influence when storage becomes economically competitive in transport and residential applications. Thus, our experience-curve data set removes a barrier for further study by industry, policymakers and academics. 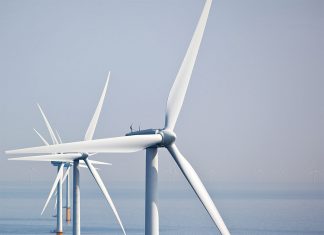 June 7, 2017
Germany, Belgium, and Denmark have recently committed to installing 60 GW of new offshore wind power over the next decade. The move will multiply...