Home Wind US Billionaire’s 1,000 Turbine Wind Farm Would Power Every Home in LA... 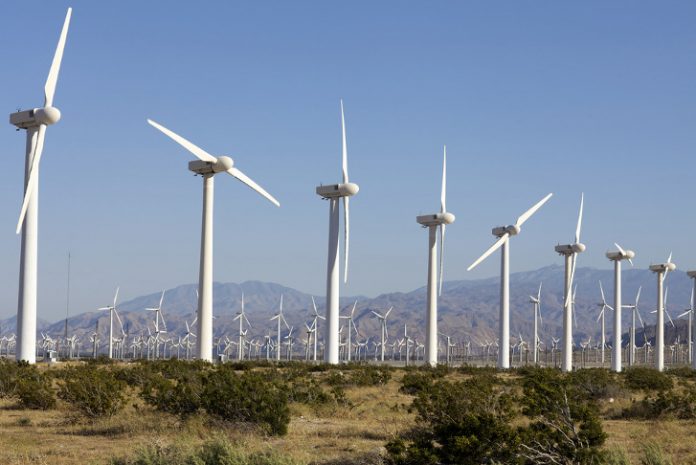 There’s the Wyoming you see on postcards — the snow-dusted mountains and caramel-colored prairies where movie stars build their second homes. But there’s another Wyoming — the one that powers America’s homes and businesses.

The Cowboy State churns out more coal than all of Appalachia, and it’s home to some of the strongest winds on the continent.

In Carbon County, Wyoming — so named for its abundant reserves of coal — conservative billionaire Philip Anschutz is building the country’s largest wind farm.

Its 1,000 turbines could generate enough electricity to power every home in Los Angeles and San Francisco — electricity that will be shipped to California by way of a brand new 700-mile transmission line.

Anschutz, who owns the conservative news outlets The Weekly Standard and The Washington Examiner, has given millions to Republican politicians.

But, despite his political leanings, and the promise of hundreds of construction jobs in Carbon County, his project — and others like it — have faced persistent headwinds in the Republican-dominated state legislature.

Earlier this year, legislators tried to prevent Wyoming utilities from selling wind power. The bill went nowhere, but it points to an undercurrent of hostility toward wind.

Wyoming is currently the only state to tax wind power, and legislators have pushed to raise the wind tax from $1 per megawatt hour to $3 or $5. Anschutz’s business fought both proposed tax hikes, which died in committee.

Republican legislator Mike Madden, who championed these measures, made his feelings clear. “These wind guys,” he said, “they feel that they are just too good to be taxed.”

Madden, like his colleagues, is trying to fill a hole in the state budget. Wyoming has no income tax. Oil, gas and coal royalties supply most of the state’s revenue. Now, coal is in decline.

Consumption is waning, and workers are losing their jobs. This has produced a budget shortfall for which there is no easy fix.

Under the current system, Wyoming effectively imports its tax revenue. Most coal is shipped to power plants out of state, meaning ratepayers in Texas, California and elsewhere pay the tax on coal.

If you buy electricity from a power plant anywhere in the United States that burns Wyoming coal, you are helping to put Wyoming teachers in Wyoming schools and lay Wyoming asphalt on Wyoming roads.

In recent years, falling demand for coal has starved the state of essential revenue. Legislators need to fill the budget gap, but there is little interest in imposing an income tax.

So they are slashing expenditures and looking to other sources of revenue.

Together, Wyoming’s powerful winds and budget woes have produced a peculiar cast of characters — in Anschutz, a conservative media magnate pushing for renewable energy, and in Madden, a pugnacious libertarian furiously trying to raise taxes.

Madden says he harbors no ill feelings toward wind.

His motives are ideological. Asked if he felt a responsibility to protect coal jobs — which are fleeing the state in droves — he said, “I’m not interested in picking one of our resources and protecting it.

That obviously is not my philosophy at all. I want the free market to pick it, not to have government politicians pick it.”

Madden is nothing if not consistent, and his approach to tax policy would strike many as reasonable. But experts warn against raising the wind tax at a time when the state is trying to attract developers and create new jobs.

“Wyoming is perceived by many wind developers to be kind of anti-wind,” said University of Wyoming economist Robert Godby. “

Suddenly the state is suggesting that we might raise the tax by four or five times? That’s not conducive to economic development. Tax uncertainty is almost as bad as having high taxes.”

Wind is a multi-billion dollar opportunity for Wyoming. Anschutz’s wind farm and transmission line come with an $8 billion price tag.

Godby fears the state’s perceived hostility toward wind could ward off future projects: “Imagine you’re in the board room of a major wind developer, and you’re suggesting a billion-dollar investment, and you say I’m going to put it in New Mexico or Nevada or Wyoming.

The board might say, ‘Well, we’re not putting it in Wyoming.’”

Notably, Wyoming’s attitudes toward wind are about more than just money. Many in the Cowboy State see turbines as a blight on the landscape.

Wyoming is defined by its jagged mountains and open prairies. Wind farms threaten to mar its most treasured vistas.

“You can be camping on the plains, maybe a sleeping bag rolled out on the ground, not even a tent over your head, and you can feel like you are on the same plains that Native Americans have experienced for millennia,” said Godby.

“But then you turn around and look behind you, and the entire horizon might be red blinking lights from the wind turbines, and those really kind of infuriate people.”

A wind developer, who asked to remain anonymous, recalled a trip to the state capital: “One legislator in particular said, ‘We don’t want more wind.

We want you to burn more coal.’ They say, ‘I hate wind. I hate seeing those turbines. They’re killing our landscape, and I just don’t like it.’”

Of course, attitudes may change. Wind turbines, now regarded as an eyesore, may come to represent industry, security and prosperity. To that end, Godby said legislators should leverage tax policy to attract more wind jobs.

“We could say, ‘Hey, If you build a wind facility, and the manufacturing of some of those components occurs in Wyoming, we will give you a tax break,’” he explained.

This would draw new wind projects and manufacturing outfits, delivering a wealth of jobs and tax revenue. Wind energy, said Godby, “is the biggest opportunity presenting itself to the state.”

Wyoming finds itself in an unusual place. Nationwide, the shift to clean energy will likely create millions of jobs, but there will be winners and losers.

Wind-rich Iowa will cash in on demand for cheap, low-carbon power, while coal-dependent West Virginia stands to lose more jobs than it gains. Wyoming straddles both sides of the energy divide.

Coal from Wyoming’s Powder River Basin is among the cheapest and purest around.

Decades from now, when the final shipment of American coal heads to the last remaining coal-fired power plant, it will depart from a Wyoming mine. Along the way, that train will pass some of the most productive wind farms in the country.

How fast will the future come? It’s hard to say. Reflecting on the fate of wind in Wyoming, Rep. Madden conceded, “It’s a resource in a like manner to coal and natural gas and so on.”

He then paused for a moment before returning to his favorite talking point: “I just think that it’s fair not to pick a favorite.” July 12, 2017
The all-new Audi A8 made its world debut today at the Audi Summit in Barcelona. In its fourth generation, the new A8 features a new...