Tesla Autopilot is about to encounter some serious competition.

It comes from Cadillac, in the form of Super Cruise, an automatic steering system that Cadillac bills as “the industry’s first hands-free technology.”

With Super Cruise, however, a driver could spend hours on a freeway without ever having to touch the steering wheel at all.

“This is the first system … where the car is doing the driving, and the human is overseeing it,” he said. “It’s an explicitly hands-off system.”

Advanced as it appears to be, the system cannot be considered in any way “driverless.” The human driver remains responsible for the operation of the car — functionally, and legally.

Super Cruise includes a tiny camera that tracks eye and head movement to make sure the driver is paying attention to the road, ready to take control if needed. Look away from the windshield too long — 10 seconds or so — and the car will flash warnings and sound alarms with increasing urgency, and eventually ease to a stop if no action’s taken.

Tesla Autopilot and systems from Mercedes-Benz and BMW don’t use head tracking. They require drivers to return hands briefly to the steering wheel for a few moments after a short passage of time to keep automatic steering engaged.

This week, Audi said it introduced what it calls the “AI Traffic Jam Pilot” on its top-line A8 limousine, capable of driving hands-free on in a single lane on divided highways at up to 37 miles per hour.

The Cadillac system operates at highway cruising speeds. For now, Super Cruise will be available only on the 2018 CT6, Cadillac’s flagship sedan. Dealers will start receiving those cars in September. Cadillac hasn’t priced the option yet, but competing systems run several thousand dollars. Already, an option-loaded CT6 runs near $90,000.

“They’re going to get some people who would never consider a Cadillac to buy a Cadillac to get this,” Ramsey said. “Though I don’t know how big that universe is.”

But hands-free driving is likely to filter down to less expensive automobiles over the next few years as more systems are sold and costs are reduced — assuming it proves popular and reliable. The light bar turns red when the driver needs to turn attention back to the road. If there’s no response, a chime sends an audio warning and the red light flashes. A voice alert follows, and soon the car will ease to a stop. The camera can be seen in front of the speedometer. (Wes Allsion / Cadillac)

Tesla set the pace for automatic steering when it introduced Autopilot on its luxury cars in 2014, adding a sophisticated layer to smart cruise control, now a popular option even in mid-priced vehicles.

Smart cruise control adjusts speed and braking to maintain a distance with the car ahead, and can help a driver keep the car from drifting into another lane.

But smart cruise systems can’t negotiate curves without human input. That requires automatic steering. “The big deal when Autopilot was introduced is it wasn’t just accelerate and brake, but it could turn corners,” said Karl Brauer, analyst at Kelly Blue Book. The Super Cruise on/off button on the left side of the steering wheel, center. (Wes Allison / Cadillac)

Beyond hands-free driving, Super Cruise introduces another innovation. Where the Tesla relies solely on camera and radar sensors to identify lane markings and other vehicles around the car, Super Cruise adds a combination of GPS and digital mapping to anticipate terrain to make for smoother turns.

Cadillac said it has mapped practically all interstate highways and limited access roads with on-off ramps in the U.S. and Canada — 160,000 miles’ worth.

Combining GPS positioning with the map, the carmaker said Super Cruise can see 2,500 meters ahead. The carmaker said that helps keep the car centered, making for a smooth ride, and lessening the chance that the system will be confused and start wobbling a bit as it searches for lane markings, as Teslas sometimes do.

And the map system allows Super Cruise, unlike Autopilot, to automatically adjust speed while taking a curve.

Super Cruise carries some limitations, however. For now, it only works on major highways; once you hit the exit ramp, it turns itself off. And it lacks some features offered by Tesla, including automatic lane changes.

Cadillac invited the Los Angeles Times to try a CT6 sedan equipped with Super Cruise for an hour along Interstate 280 in Silicon Valley. A lot of time was spent with arms folded, looking down, sideways, and backwards at length to see when the warnings would kick in.

Ten seconds is plenty of time to make meaningful eye contact in conversation with your spouse, or turn around to yell at the kids. You can cradle a cup of coffee with both hands and gaze out at the world outside the windshield as long as you’d like.

And while the company is unlikely to say so, for legal reasons, 10 seconds is enough time to check a message on your phone and type out a short response. Or write some thoughts on a notepad.

But turn away long enough and a slim light bar embedded at the top of the steering wheel shifts from green to red. Soon an alarm chimes, or the driver seat vibrates (driver’s choice), the red lights start flashing, a voice lays the warning on thick and before long — say you’ve fallen deep asleep or you’ve had a heart attack — the car will slow down in its lane and gradually come to a stop.

The I-280 trip was too short to make a thorough assessment of the technology, but Super Cruise provided a silky smooth ride with no wobbling.

Super Cruise’s restriction to major-highway driving and the lack of features such as automatic lane changing in part stem from Cadillac’s concern about public perception.

While it plans to give Super Cruise more room to roam as the technology develops, “we are taking a very systematic approach,” said Cadillac Global President Johan de Nysschen.

That contrasts with Tesla’s more aggressive approach to technology development, in keeping with its Silicon Valley mentality. Tesla makes clear that its Autopilot technology is in “beta” phase — tech industry speak for new software rolled out to select early customers, who are warned it might contain bugs.

The Tesla approach tends to get technology into the market faster. “They are more aggressive,” analyst Bauer said. Every new Tesla now is equipped with the hardware needed to handle completely self-driving cars, including the upcoming Model 3.

De Nysschen said Cadillac is trying to balance the need to quicken the pace of technology development while ensuring the technology is safe and secure.

“We can’t contemplate the idea that customers are doing the beta testing. Our beta testing is done by engineers.”

Still, GM is taking a big risk, said Gartner’s Ramsey: If any major safety problems unexpectedly arise, the media will jump on it and public acceptance of self-drive technology could turn negative.

While the National Safety Council estimates there were nearly 40,000 U.S. highway deaths in 2016, only one has been reported with an automatic steering system engaged. That was a Florida crash in May of 2016 that killed a Tesla driver as his car drove under the trailer of a big-rig truck.

National safety officials determined the Autopilot system could not be blamed for that crash. But in its aftermath, and under public pressure, Tesla reduced the amount of time drivers could go hands-free on Autopilot.

Laws on driverless cars vary from state to state. Michigan and Florida, for instance, impose few restrictions. California is in the midst of a driverless vehicle regulation revamp. The federal government has issued guidelines, which are being reviewed by the Trump administration.

Since 2016, all new Tesla cars have been equipped with sensor hardware capable of total driverless operation when the software is ready. No date has been set, but Tesla Chief Executive Elon Musk said the company is moving toward driverless systems as fast as possible.

Even today’s robot-assisted cars, Musk has said, are safer drivers than humans.

They may be, said Cadillac’s De Nysschen, but “we need to be able to gain the confidence of both the regulators and the public.” 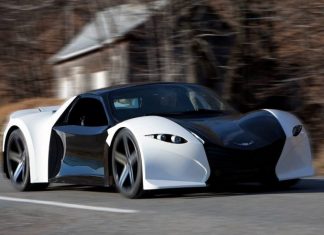 June 4, 2017
Canadian car manufacturer Dubuc Motors has announced its Tomahawk, an electric sports car with some incredible specifications: most notably, a 0-60 time of just...