A reporter on board Air Force One on the way to France asked Trump whether he was joking about building a “solar wall.”

“No, not joking, no. There is a chance that we can do a solar wall. We have major companies looking at that,” replied Trump.

Trump added that “there is a very good chance” a solar wall could be built, and that “there’s no better place for solar than the Mexico border — the southern border.”

Trump digital director to meet with House Intel CNN’s Begala: We should be debating ‘whether we should blow up’ Russian Intel agencies If Republicans have lost Moran, they’ve lost the healthcare battle MORE doesn’t know what he’s talking about. I happen to be an electrical engineer, I happen to know a little bit about solar power, I happen to know that what he’s saying just doesn’t make sense,” said Cárdenas.

“Basically what he’s saying is, ‘Why don’t we build a ramp so that people can drive over?’ instead of building a wall that’s supposed to do what he wants it to do,” added Cárdenas.

Trump said the wall would have to be see-through, a demand that’s been made by some Border Patrol officials who oversee the border.

Department of Homeland Security (DHS) Secretary John Kelly told Congress in February that officers under his command had asked for a barrier through which they could see the other side.

“You have to be able to see through it. In other words, if you can’t see through that wall — so it could be a steel wall with openings, but you have to have openings because you have to see what’s on the other side of the wall,” said Trump Thursday.

Trump said there was a need for 700-900 miles of border wall. There are currently about 600 miles of different types of fencing on the U.S.-Mexico border.

DHS is working on improvements and repairs on those sections with the department’s current funding.

Democrats have threatened to derail any budget proposal that includes specific funding for construction of new stretches of the wall.

But Trump said the existing barriers are part of the wall that he made a central promise of his campaign.

“So in a true sense, we’ve already started the wall,” he added.

“Look, he’s trying to create a victory out of nothing because he knows it’s going to be nearly impossible to get funding for a wall, and he knows his supporters are so dogmatic they’re just going to accept any lie that he says as truth,” said Rep. Ruben Gallego (D-Ariz.). 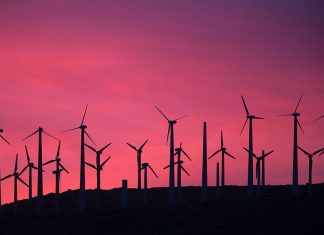