COVENTRY — The leadership at Green Development, LLC, formerly Wind Energy Development, say their proposed solar farm in Greene will be the last renewable energy project they take on in Coventry. The Daily Times caught up with the company’s Founder and Chairman Mark DePasquale as well as the new CEO, Al Bucknam, at their offices on Quaker Lane in North Kingstown last week to talk about the status of their work in the town.Green Development is the installer of ten wind turbines in Western Coventry and is in the process of developing a solar array between Cars Trail and Flat River Road. The company also has wind turbines in Portsmouth and North Kingstown.The local projects have led to some contention among residents who have alleged issues with flicker and noise caused by the turbines and who have expressed concerns about the proposed solar farm. DePasquale said he hopes to ease the concerns of residents who have stated they are worried his company’s projects will continue to expand in the area. Opponents have stated that the renewable energy projects are altering the character of the district.

“People are saying we’re going to have more in Greene, but this is the last project they’re going to have there,” he said. “There are two smaller projects that have already been permitted, and once those are built and this is done, there won’t be another solar array or wind project in that whole area.”In terms of flicker, the town does prohibit more than 30 hours of flicker per year, but DePasquale and Bucknam say there are protocols in place to monitor this issue and the company is actively working to respond to and address any valid concerns at its own cost.“The only thing I can’t change is if you don’t like looking at them,” DePasquale said.He said the town of Coventry “opened the door” for renewable energy when they put out a Request for Proposal (RFP) for wind at Picillo Farm in Western Coventry. The farm is currently home to two turbines known as WED Coventry 1 and 2. Coventry approved a 20-year Power Purchase Agreement with Wind Energy Development in 2012 which has an estimated benefit of $50,000 in reduced energy costs to the town.The other turbines are located on a number of parcels owned by a group of farmers in Western Coventry. The property owners accept lease payments which help them maintain their property.“A lot of farmers and landowners who own their land for generations and generations, they don’t want to sell their property ,” DePasquale said. “These parcels are beautiful and they look at it as how am I going to preserve my land for the next 25 years, so they take a lease payment from us which is helpful for them. It’s also helpful for the state because they don’t have to sell open space.”Residents on the properties surrounding the turbines have complained of noise, with some claiming the sound can be heard even with all of the windows closed. Green Development retained a company called Noise Control Engineering, LLC in December 2016 who state in their report: “the wind turbines do not exceed the 65 dB(A) Town of Coventry noise limit.” The study results indicate that the turbines’ noise output is measured at between 35 and 47 decibels (db).“All measured levels which exceeded 65 dB(A) were identified as sources other than the wind turbines,” the noise compliance survey states. The study involved two 1-week noise monitors and attended measurements.Bucknam joined Green Development in September but said he has been working in the alternative energy industry for nearly 20 years and believes passionately in the work he does.

“I just read that 9 million people in the world die every year from pollution,” Bucknam said. “A majority of that is in developing countries where they don’t have clean technology. China has been very aggressive about deploying solar because people are literally choking to death on their coal emissions. So when you say ‘I don’t want clean energy in my backyard’ you’re saying by default ‘I want dirty technology in someone else’s backyard.’ We have to make trade-offs.”He added, “There are so many artificial, man-made things that have been around a lot longer that people have just become used to.”According to DePasquale, if there is an issue with a neighboring property owner, “we immediately go out. We have visited people to try to understand, to try to talk to them. We get emails from people that they have questions and we go out and meet them. People have my cell phone number.”“Once they understand usually I don’t get another call,” he added. “People are curious and want to ask questions and we’re here to answer them.”Their proposed solar array is estimated to produce an additional 3.75 megawatts per year and roughly $18,000 per year of revenue to the town, producing enough energy to power about 7,500 homes. The project has changed quite a bit since its original plan, mainly in that the size of the structure needed to be reduced.“It’s smaller because the grid doesn’t have any more capacity,” said DePasquale. “Everybody keeps saying there is more coming, but this is the end of it.”Follow Kendra Lolio on Twitter @kendralolio 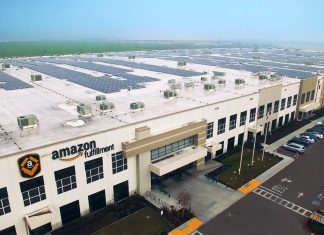 November 30, 2017
From Amazon to Etsy and Microsoft, tech companies are demanding cheaper and cleaner electricity as their data demands grow. That runs counter to Trump-administration...