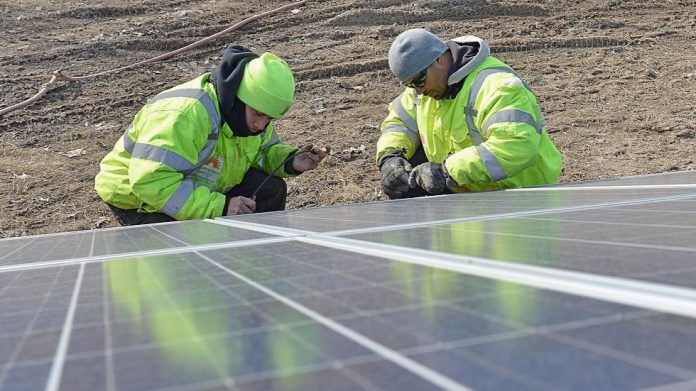 Up to 88,000 American jobs are at risk if the Trump administration imposes tariffs on solar photovoltaic imports, a move that is increasingly likely after a recommendation issued by the International Trade Commission on Tuesday. Following contentious hearings in a trade case that has rocked the industry, the commissioners recommended tariffs of 35 percent on some imported panels.

The implications of a decision to raise the cost of foreign imports — now resting entirely with the president — will ripple through the energy industry, from installers to the utility sector and even the military, which has come to rely on solar for many of its operations. But nowhere will the impact be greater than on disadvantaged communities that are just beginning to reap the benefits of renewable energy, and the jobs that come with it.

The steady decline in residential solar prices over the last ten years, which had dropped 70 percent before the trade case began, has opened solar access to millions of Americans. Solar provides families the opportunity to take ownership of their energy, reduce their carbon footprint and save money. It has also allowed states, local governments and utilities to invest in solar as a cost-effective way to provide energy assistance to constituents who struggle to pay their energy bills.

Meanwhile, the growing industry has created tens of thousands of solar industry jobs — more than 260,000 Americans are now directly employed in the solar industry. More than half of those are working in installation and sales positions that are accessible to people with no advanced degrees.

The Triangle Court Apartments in Richmond, California are just one example of how low-income communities are benefiting from solar. The affordable housing development is home to 98 families living on the edge of poverty and directly downwind from an oil refinery that is a major contributor to air pollution in the region.

This year the local housing authority was able to take advantage of a state program to install solar on all of the units, adding to the city’s clean energy mix and reducing energy bills for each of the families living there by 98 percent. In the process, 61 community members received 900 hours of hands-on solar installation training, helping them apply for jobs in the industry.

The economics of these projects for cash-strapped affordable housing owners, as well as utilities, municipalities and state governments, depend upon competitive panel pricing. As prices have dropped, more and more communities have been able to make these investments, opening renewable energy access to hundreds of thousands of low-income families.

In Colorado, for example, the Colorado Energy Office’s modest $1.2 million investment catalyzed seven community solar projects totaling 1.4 megawatts now providing low-cost power to over 300 low-income families, as well as nonprofits and affordable housing providers. This momentum has spread to the District of Columbia and Illinois, which have both committed to large-scale programs putting solar to work for disadvantaged communities.

These gains would not have been possible even ten years ago. In California, legislators across the political spectrum agreed to renew the state’s landmark low-income solar incentive programs in 2016, after the expiration of the California Solar Initiative, because the programs would be able to meet the same production targets as the original 2008 programs at half the price, with job training to boot.

Although state and local governments are likely to continue investing in renewables no matter the trade case’s outcome, a tariff will mean higher solar panel prices, fewer projects, fewer jobs and less opportunity for energy equity.

GRID Alternatives, the nation’s largest nonprofit solar installer, already had to make the hard decision to lay off 7 percent of its staff — 24 people — in the face of price uncertainty. These included solar installers, outreach workers, office assistants, graphic designers; people of diverse backgrounds who were making a living wage in the clean energy economy.

The Trump administration is at a crossroads. Will solar be a tool for American energy independence, a jobs engine and way to clean up air quality for our most impacted communities, or will it be a luxury resource, accessible only to those who can afford the high upfront costs?

We hope for the solar industry and for disadvantaged communities across America that the administration’s choice will be for the people.