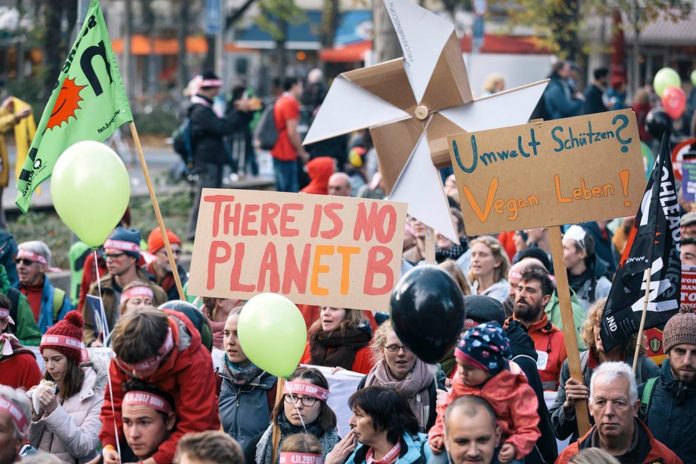 Just days before world leaders are set to gather in Bonn, Germany for the annual United Nations Climate Change Conference (COP23), tens of thousands of activists from across the globe kicked off a series of planned actions on Saturday by taking to the streets to demand an end to coal, denounce U.S. President Donald Trump’s climate denial, and highlight the necessity of moving toward 100 percent renewable energy as quickly as possible.”This is a pivotal moment for global efforts to combat climate change,” 350.org, which helped organize the events set to take place through next week, noted in a statement. “Countries will either succumb to the forces of denial, like the Trump administration, or move ahead to a clean energy future that works for all.”The stated aim of the COP23 talks—this year presided over by Fiji—is to “advance the aims and ambitions of the Paris Agreement and achieve progress on its implementation guidelines.”

But Trump’s decision to withdraw the U.S. from the agreement casts a “dark shadow” over the negotiations. As the New York Times reported Thursday, the Trump administration will attempt to use COP23 as a platform to “promote coal, natural gas, and nuclear energy” and argue that fossil fuels should “continue to play a central role in the energy mix”—despite the fact that the U.S. government’s own climate assessment, unveiled Friday, links fossil fuels to the warming of the climate.So while Trump and his allies are “twisting themselves into pretzels to justify blocking national and international climate action,” environmentalists are working to place pressure on world leaders to forge ahead with ambitious goals that place people and the planet over the interests of oil giants.”The wildfires, hurricanes and floods of these last few months show us that we don’t have time to play games of climate denial or greenwashing of dirty energy,” Cindy Wiesner, executive director of Grassroots Global Justice Alliance, said in a statement. “COP23 is an opportunity for world leaders to catch up to the solutions already coming from communities on the ground.”With the small island nation Fiji presiding over the talks, particular attention is being drawn to the Pacific Island nations that are severely threatened by the extreme weather that results from climate change. Throughout COP23, Pacific Climate Warriors will demand that world leaders “kick the big polluters out of the climate talks,” “end the era of fossil fuels,” and “move to 100% renewable energy.””Putting a stop to coal and other forms of dirty energy is crucial in addressing the global climate emergency,” concluded Karin Nansen, chair of Friends of the Earth International. “We urge developed country governments to stop exploiting dirty energy now and to stop financing dirty energy projects at home and in developing countries.” Reposted with permission from our media associate Common Dreams.RECOMMENDEDKey Trends to Watch at COP233 Ways Climate Change Affects Our Health Today
common_dreams July 12, 2017
There’s the Wyoming you see on postcards — the snow-dusted mountains and caramel-colored prairies where movie stars build their second homes. But there’s another Wyoming — the one that...