When state officials built and equipped the biggest solar panel factory in the Western Hemisphere, they thought they were buying into an industry that would keep growing and growing, putting Buffalo on the cutting edge of the 21st Century economy.
It may turn out that way, but right now the solar industry is in a slump – and Buffalo is feeling it.
Solar energy is still likely to be part of a growing renewable energy future, but the Tesla Inc. solar panel factory in Buffalo is facing a different market than when state officials made the $750 million investment in the Riverbend plant the centerpiece of Gov. Andrew M. Cuomo’s Buffalo Billion initiative.
After years of fast-paced growth, the residential solar market is expected to shrink for the first time ever in 2017 and grow at “a limited pace” in 2018, according to analysts at GTM Research. State regulators have chipped away at the incentives for residents and businesses to go solar. Falling natural gas prices have made electricity cheaper, reducing the savings from switching to solar.
Tesla is changing, too.
Tesla’s solar energy deployments fell by 42 percent during the summer to their lowest level since the second quarter of 2014. The electric vehicle maker, which reported a $620 million loss during the third quarter, said it decided to move away from less profitable commercial and industrial projects. Tesla is conserving cash and reducing losses at the solar energy business at a time when analysts estimate the company will need upwards of billions of dollars more to ramp up production of its Model 3 sedan and complete its Nevada gigafactory that builds the batteries for its electric vehicles.

Even so, the company says its Buffalo Riverbend factory remains on track to begin making Tesla’s new solar roofing product by the end of December. The factory has more than 100 workers on site and Tesla has more than two dozen types of job openings posted on its website. Its partner, Panasonic, is already making solar modules in Buffalo. Production is expected to ramp up “considerably” during 2018, Tesla executives said.
“Renewable energy is a mega-trend of the 21st Century,” said Howard Zemsky, the Buffalo developer who heads Empire State Development. “I’ve been involved with businesses for over 30 years. Success is all about adapting to change and innovating. I think Tesla doesn’t just adapt to change, they define the change in all their business segments.”
Tesla is moving away from SolarCity’s leasing model, which fueled its rapid growth but also built up billions in debt as the company fronted the cost of most of the solar arrays it installed. Tesla is trying to reduce the stubbornly high cost of signing up new customers by shifting more of the sales focus to its network of 318 Tesla electric vehicle stores. SolarCity’s workforce has been cut by more than 20 percent, including the elimination of its door-to-door sales force. A spokeswoman for Tesla said the layoffs have not affected its Buffalo plant.
The company has also focused on more profitable installations.
Musk sought to reassure investors about the company’s solar energy business during a conference call last Wednesday.
While the solar energy business has shrunk to 2014 levels under Tesla, Musk said he expects installations to start growing again as Tesla moves forward with its plans to sell solar panels at its Tesla vehicle stores. Not only will that reduce sales costs, but Musk believes consumers who are interested in electric vehicles are more likely to want solar panels on their homes.
“We do expect solar demand to rebound as we move solar sales into all of our stores, which is a much more efficient channel for demand generation. And that’s just for conventional solar,” Musk said.
Its solar roof – which looks like a regular roof but has solar cells built in that generate electricity – is aimed at an entirely new group of customers who previously were shut out of the solar energy market because their roof was older and needed replacing soon. It also could be targeted toward consumers building a new home.
“We’re confident it’s going to have extremely high demand,” Musk said.
“I have no doubt that this will be a very significant part of the business down the road,” Musk said. “It just takes a little while to get these behemoths rolling. But once it gets rolling, it’s going to be a behemoth.”
But the solar roof, unveiled at a flashy Hollywood event a year ago, still is being tested on the roofs of a handful of Tesla executives and insiders, including Musk. It isn’t being installed on customer homes.
“We’re just going through the validation process,” Musk said.
“They’re working right now,” he said. “I have the solar roof on my house and I didn’t even notice that they were there, they blend in so well.”
Because Tesla expects the solar roof to last at least 25 to 30 years – it is offering a warranty to consumers for as long as they own their house – Musk said the company has been trying to test the solar roof’s long-term durability, but those lab tests take months to complete.
“There’s a certain rate at which we can do accelerated lab testing on components and maybe try to accelerate lab testing on a 30-year roof in six months. But it’s hard to do it in less than about six months,” Musk said. “Then we’ve got to pack that into the production process.”
The decline in Tesla’s solar business means that Tesla’s solar energy business will have to rebound sharply to become the type of job-producing heavyweight that state officials initially hoped for.
Zemsky thinks it will happen.
“Riverbend is unique in our hemisphere – well positioned in a long-term growth industry,” he said. “The short term gyrations will worry us all, but the long term prospects are solid, in my opinion.” 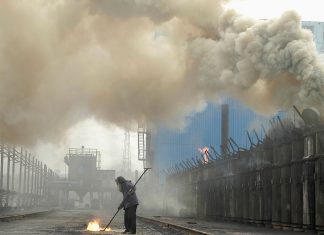 July 18, 2017
Humans must start removing carbon dioxide from the atmosphere as soon as possible to avoid saddling future generations with a choice between extreme climate...