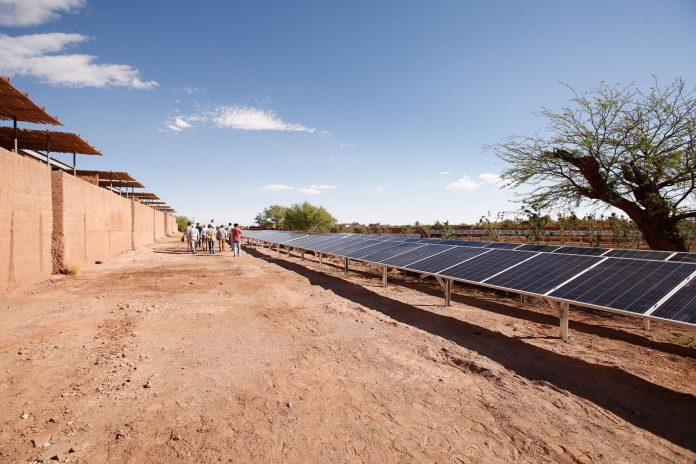 Chile’s Atacama Desert is the driest non-polar place on Earth. It’s so dry that some parts of the desert have never seen a single drop of precipitation, and there’s rarely lasting cloud-cover. While these conditions are hostile for human life, domestic and international businesses think they’re just right to host enough solar panels to power all of South America.

Located in the northern Chile town of San Pedro—a destination for adventure tourists and backpackers—is the unique Tierra Atacama Hotel and Spa. It sits nested in an oasis-like patch of greenery in a region with hundreds of square miles of bright brown dirt. The hotel’s contemporary property sits at the outskirts of San Pedro, overlooking a scenic chain of active volcanoes in the distance. Built inside the clay walls of a centuries-old cattle corral, the modern glass and adobe structure blends into the desert as if it were camouflaged. But inside, the hotel is bustling with life.

Medicinal herbs are planted on seemingly every green space flanking sidewalks and patios, and a vegetable garden used by the hotel’s kitchen is clustered outside the main entrance. Built with local materials, everything from the pool to outdoor fire pits seem to simply emerge from the ground. Catching the eye are the 96 solar panels that stand about three feet off the ground around the hotel’s outer wall.

It’s these solar panels that recently attracted a collection of ambitious visitors to the remote region. German officials who invested in the solar project, representatives from Chile’s energy department, reporters, and an ambassador were eager to see the newly unveiled panels. Ask the hotel’s owners and they’ll tell you they’ve always had an eye on sustainability, so becoming energy independent seemed like the logical next step. They say the Tierra Atacama hopes to not only be a model of sustainability for other hotels and businesses, but also a model for a country hungry for energy independence.

Schulze shared this hope after a small reception, at which Tierra Atacama staff announced they would soon be running entirely on solar energy. (The Tierra Atacama is one of National Geographic’s Unique Lodges of the World. Learn more about it here.)

Tierra Atacama announced in October that it would be shutting down its diesel generators and replacing them with solar panels designed by German renewable energy company Kraftwerk. Thanks to improving technology in lithium ion batteries, the hotel is able to gather all the energy it needs during the day. While the hotel is relatively boutique, containing 32 guest rooms, it requires a steady stream of electricity to power a large kitchen, spa, and recreational areas.

In total about 100 kWh is needed to run the resort at capacity. The 96 new solar panels will generate about 156 kWh, meaning the system should have enough energy left over and stored in batteries to power the hotel at night.

The Tierra Atacama and Kraftwerk teams say the project would not have worked without the lithium ion batteries distributed by German energy company Quinous and manufactured by Samsung. It’s perhaps fitting that lithium would be the key to unlocking Chile’s potential energy future; nearly 30 percent of the world’s lithium is mined from the Atacama Desert.

Just an hour away from San Pedro was once the small village of Chuquicamata. In the 1960s, the entire town was uprooted and resettled in the nearby city of Calama to make room for the world’s largest copper mine. Today, the Atacameños are divided in how they feel about the largely foreign companies mining in the region. The industry has provided an economic boon in the form of jobs, but anxiety about how mining will uproot towns or damage the desert is widely felt.

Some of the Atacameños have warned that solar energy may create more demand for lithium mining in the region. At the same time, many of the locals would like to see the area’s smog-belching diesel generators replaced with something cleaner. Since the region is so remote, much of it isn’t connected to the wider electrical grid, making the generators a necessity. That’s still how most of San Pedro gets its power. For running water, many homes still rely on centuries-old channels that move groundwater up from an aquifer.

A representative from Chile’s department of energy who attended the Tierra Atacama solar unveiling preferred not to give her name so she could speak candidly about the difficulty the country faces in implementing renewable energy. Like in the U.S. and Europe, renewable energy companies face pushback from oil and coal companies with well-established lobbying groups, she said. Partly as a result, much of the country’s growing solar energy production is fueled by foreign investments.

But Schulze and Purcell are hopeful that Chile can soon emerge as a leader in solar power. They see a lot of potential: In 2016, the solar power sector grew faster than all other forms of energy, according to the International Energy Agency. 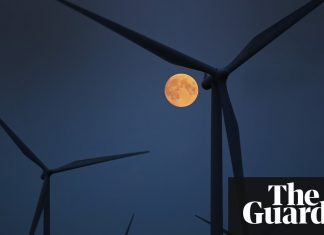 May 16, 2018
Britain’s windfarms provided more electricity than its eight nuclear power stations in the first three months of 2018, marking the first time wind has...