Home Geopolitics New Zealand plans to power its grid with 100% renewable energy by... New Zealand’s 4.7 million people already obtain over 80 percent of electricity via sustainable sources, according to Bloomberg. But Ardern – now the world’s youngest female leader – seems to think they can do even better. She wants the country to move over to obtaining electricity completely from renewable energy by 2035.
Related: New Zealand river world’s first to obtain legal status as a person
The move won’t be without its challenges. New Zealand generates around 60 percent of their power from hydropower, according to 2016 figures. But when dry conditions cause lake levels to drop, gas and coal have helped out. Without those fossil fuels, electricity consumers could experience price hikes. But the country still has made a lot of progress towards the ambitious goal; in the winter of 2016, renewable energy generation actually peaked at 93 percent, according to Bloomberg.

Ardern hasn’t put out full details of her plan to get New Zealand to a carbon-free status. She has suggested an independent commission to help meet the 2050 goal. New Zealand’s independent advisory body Productivity Commission has an inquiry into transitioning to a low carbon economy.
Greenpeace New Zealand climate and energy campaigner Amanda Larsson told Bloomberg Ardern “must prioritize closing down coal, putting a moratorium on new fossil fuel plants, building more wind infrastructure, and opening the playing field for household and community solar.” Contact Energy chief executive officer Dennis Barnes also pointed to solar – and batteries and electric vehicles – as technology that could help New Zealand move towards a greener future.
Via Bloomberg and Futurism
Images via Depositphotos and Good Free Photos 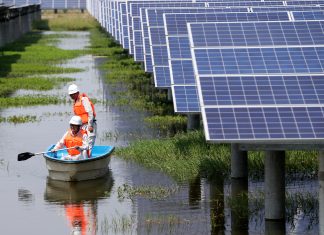 November 29, 2017
A new type of window developed by scientists works sort of like transitions lenses—the ones you can wear indoors or outdoors without scrambling between clear and...