Cleve Hill is set to become the UK’s biggest solar farm when it is built in 2020. At a capacity of 350 MW, it will be able to produce more than five times the power as the country’s current leader. And all this could happen without government help.

Government subsidies for clean energy have worked wonderfully. Greater demand for solar power means there is more money to research and develop cheaper solar panels. The positive feedback loop has resulted in stunning growth for solar power across the world.

But as solar power becomes cheaper, government assistance is likely to be cut back. The UK, for instance, cut its subsidies for clean energy in 2016. Will the rapid growth in solar power be able to continue?

Though Cleve Hill is not huge by global standards—China’s biggest will be nearly 10 times the size—it is a new kind of solar farm. Its 365 hectares of solar panels (about the same as 400 soccer fields) will receive no government assistance. The companies building it, Hive Energy and Wirsol Energy, are confident that falling costs of solar panels will make the project economical.

Earlier this year, the UK opened what was likely the world’s first subsidy-free solar farm near Flitwick, producing 10 MW of energy, but it was an extension of an already existing solar farm, which was built using subsidies. The Cleve Hill farm, then, would be the first fully subsidy-free plant in the UK.

It’s a sign that cleaner energy production could continue to flourish even without government assistance. And there’s a long way still to go: Today, solar power provides merely 0.6% of all the world’s energy—with more than 85% still provided by fossil fuels.
Akshat Rathi 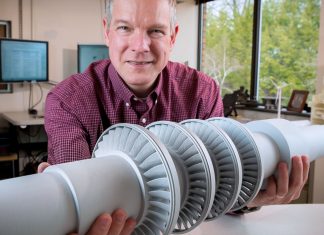 June 2, 2017
GE is working on a new desk-sized turbine which can turn the tables on greenhouse gases by using CO2 to generate electricity. Doug Hofer, steam...