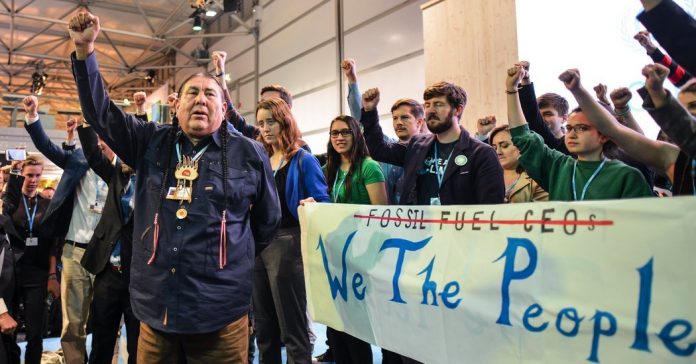 The American presentation came the same day that a new study showed that emissions were rising worldwide after three years on a plateau. Researchers said the emissions growth was driven largely by increased burning of coal in China and India.

“The question is not if we will continue to use coal, but how,” said Holly Krutka, vice president of coal generation and emissions technologies at Peabody Energy.

Michael R. Bloomberg, the former New York mayor who has spent tens of millions of dollars on a campaign to shut down coal plants, said, “Promoting coal at a climate summit is like promoting tobacco at a cancer summit.” Mr. Bloomberg, who is attending part of the Bonn conference, this week donated $50 million to environmental groups to help countries shift away from coal, starting in Europe.

While many energy experts agree that technologies like carbon capture for coal plants and nuclear power can play a critical role in reducing emissions, the fact that Trump administration officials have played down concern over global warming has triggered deep suspicion about American intentions.

“Nuclear and carbon capture are critical to reducing CO emissions, but going to Bonn to promote the technologies without admitting climate change is a crisis is a logical absurdity,” said Josh Freed, director of the clean energy program at the centrist think tank Third Way.

He said that denying that climate change is a problem while pushing technology to solve it made no sense. “Why would anyone trust or work with you?” he said.

Several American lawmakers who flew to Germany for the climate change talks denounced the coal discussion. Gov. Jay Inslee of Washington, a Democrat, pre-empted the White House event by striding into the packed conference room and calling it a “sideshow” that the rest of the world would ignore.

“It’s a total distraction,” said Andrew Steer, president of the World Resources Institute, an environmental think tank based in Washington.

Still, Mr. Steer acknowledged, countries throughout Asia and Africa are continuing to build coal plants in their quest to provide energy access for millions living without electricity. “This is not wickedness on the part of these countries that want to get cheaper energy,” he said.

Trump administration officials made a similar point. “We need to lift one billion plus people out of energy poverty,” Mr. Banks said. He argued that while renewable energy has a “bright future,” only fossil fuels at the moment can deliver enough energy to allow people to rise out of poverty.

Yet even as the Trump administration pushes for a revival of the coal industry, other countries say they are phasing it out. France has vowed to eliminate coal from its electricity mix by 2022, and Italy by 2025. The United Kingdom and Canada said this week that they, too, would take steps to phase out coal.

“We’re passed the time that we want to be using coal,” said Catherine McKenna, Canada’s environment minister. “People do not want polluting coal. They do not want it.”

Some developing countries described a more balanced view, however, conceding a need for fossil fuels in the short term while ultimately calling for stronger global action on climate change and a shift toward cleaner forms of energy, including renewables like wind and solar energy.

Officials from Bangladesh, which still gets most of its electricity from natural gas and has plans to build 25 new coal-fired plants by 2022, said they would welcome the use of technology to improve the efficiency of their coal plants as a steppingstone toward renewable energy.

“Keep in mind that this is a developing country that has a huge need” for electricity, said Muhammad Azizul Haque, a deputy secretary in Bangladesh’s Environment Ministry. “So there has to be balance, it’s not just saying, O.K., we’ll go for renewables. It’s very complicated, because people need energy.”

Pakistan, for its part, has begun importing more liquefied natural gas in order to reduce its reliance on burning coal and oil for electricity, said Tariq Banuri, executive director of Pakistan’s Global Change Impact Study Center. Those imports have helped offset 1 percent of the country’s emissions.

Mr. Banuri said that Pakistan’s emissions were likely to grow in the coming decades as it lifts itself out of poverty, though the country is also making a big push on renewable energy and could do more if wealthier nations provided more aid to help drive down the cost of wind and solar even further.

But any nuanced discussions of energy policy were overshadowed by anger at the Trump administration for disengaging from the global community on climate change.

“Climate mitigation is an important goal of the United States,” Mr. Banks said, “but I don’t think it’s any surprise that economic security and energy security are higher priorities.” June 4, 2017
E.ON, a German utility company has recently announced that they will be creating a large network of batteries to store solar energy in the...