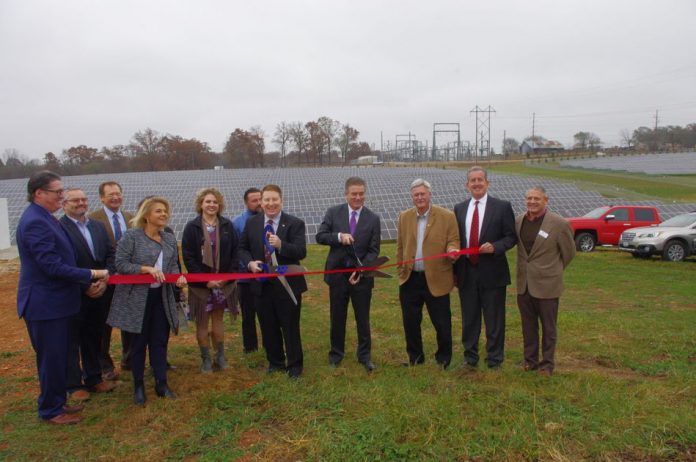 The sun wasn’t shining and rain was drizzling down as people gathered to celebrate the completion of the new Nixa Solar Farm, but those attending the dedication ceremony were assured the farm was producing energy — energy Nixa city officials say will save the city $2.5 million over the next 25 years.The solar farm, the largest in the state, was dedicated Nov. 14 in a ceremony at its site at 1565 W. Mt. Vernon St., west of Nixa. The 72-acre site includes 33,280 solar panels and is capable of generating up to 7.92 megawatts of AC power, which will provide more than 15 million kilowatt hours per year. Nixa has signed a 25-year agreement with Gardner Capital, the owner of the facility, to purchase 100 percent of the power generated by the farm, an amount it says will make up approximately 9 percent of Nixa’s annual energy consumption.At the dedication, Mark Gardner, president of Gardner Capital, Inc., said the event is a celebration of the partnership between the city, Gardner Capital and MC Power Companies, which operates the solar plant.

Gardner spoke about what he calls a revolution in how the country is working to provide energy by replacing exhaustible energy with inexhaustible energy, and a move toward a cleaner renewable energy. He noted that it is smaller communities, such as Nixa, that are recognizing the need.“There is no solar facility in Kansas City or St. Louis even close to the size of this one right here in Nixa,” Gardner said. “It’s small town American cities like Springfield and Nixa that are leading the way. We’re very happy and very proud to be a part of this project.”Loren Williamson, MC Power senior vice president, echoed Gardener.

“Five years ago, who would have thought we’d have something like this in the state,” he said.Williamson said MC Power officials broke ground on the project in late June and it was completed on schedule with minimal delays. The solar farm was placed into service Nov. 2, and the plant became fully operational Nov. 13.City officials said the project will not only reduce the city’s carbon dioxide emissions, but will also enable them to improve the city’s infrastructure while keeping rates low for Nixa customers. They said the city’s carbon footprint will be reduced by 10,542 metric tons per year, equivalent to burning more than 11 million pounds of coal or nearly 1.2 million gallons of gasoline. Officials noted that energy from the solar farm is also being purchased at a lower rate than the city currently pays for power from the City Utilities of Springfield and the Southwestern Power Administration.

“The city currently operates at about 20 percent renewable energy right now,” Nixa Director of Public Works Doug Colvin said. “That number will grow as the city and its residents move toward even better stewardship of our environmental resources.”The city of Nixa is also celebrating almost 50 years of providing its own electrical service to the community, Nixa Mayor Brian Steele said.“We began offering electrical service in August of 1964,” he said. “We’re proud to be able to upgrade our services to our community members.” June 17, 2017
Lyft is setting a new goal to have all of their electric, autonomous vehicles on its be powered by 100% renewable energy. Last year, one...