GEORGETOWN, TEXAS – Georgetown has gained international spotlight for choosing to move to 100 percent renewable energy, and a local brewery is choosing to join in on the efforts.

It’s part of a movement in Georgetown.

As the City of Georgetown moves toward 100 percent renewable energy, right now much of that comes from a Wind Farm west of Amarillo. But starting next year, that transition will be complete when they add a solar contract.

“The renewable energy is really important to us and to our generation and it’s things like this that are making Georgetown really attractive to a lot of new people, it’s been one of the fastest growing communities in the nation, and that’s one of the reasons why,” Rentschler said.

Rentschler said they’ve taken extra steps to tap into the city’s renewable energy, such as using electric boilers instead of propane.

“The boilers are a little bit more expensive up front, but the cost savings are in the long run, and we’re in this for the long haul,” Rentschler said.

He said they also use electric-powered fork lifts, buy products to make the beer that is made from renewable energy — such as malt — and package the beer in cans, which can be recycled.

“It’s important to us because we want to minimize our impact on the planet and on the environment,” Rentschler said.

But he also said it just makes sense for a small business.

“First of all it’s cheaper, and we lock in a rate over the next 25 years, so as a business person, it’s important to me because I know what I’m going to be paying 25 years down the road,” Rentschler said.

Each can, packaged and sent to stores across central Texas, advertises their efforts.

“Because I think the consumers care. You know, people care how their products are made — what goes into making it,” Rentschler said.

He told KVUE he’s also looking to add solar panels to the brewery, as well as have electric powered delivery vehicles.

“We’ve received an outpouring of support from our community locally and nationally, people send us messages all the time congratulating us and thanking us for making the effort,” Rentschler said. 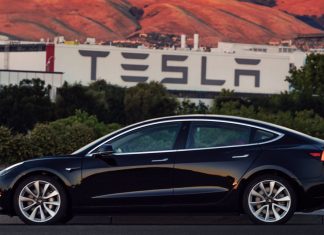 July 9, 2017
It’s here: The first ever production Model 3 has rolled of Tesla’s assembly line, and into the possession of its owner – Elon Musk....