California’s major utilities are on track to meet or exceed the state’s target of 33% renewable energy by 2020 and investor-owned utilities project they will actually get to 50% by then, according to a new report from the California Public Utilities Commission.

The state’s gains in renewable energy capacity come at a time when major manufacturers in the United States have ambitious goals around inexpensive renewable energy, but struggle to access the clean energy they need. In September, David Gardiner and Associates found that of the 160 largest global manufacturing companies with a national footprint, 25% had established renewable energy targets. More than a dozen are aiming for 100% renewable energy.

In 2002, California passed the Renewable Portfolio Standard (RPS) to set targets for how much electricity from renewable sources utilities would sell. In the market-based program, compliance is determined by the quantity of renewable energy credits acquired. The goal set in 2011 for 2020 is 33%. Two years ago, the governor signed the requirement of reaching 50% by 2030 into law.

The California Public Utilities Commission’s annual report on the standard, published this month, checked in on procurement from investor-owned utilities, publicly owned utilities, electric service providers, and community choice aggregators (CCAs) — government agencies that purchase and develop power on behalf of residents, businesses, and municipal facilities in a local jurisdiction.

The report forecast that CCAs and small and multi-jurisdictional utilities will meet or exceed 2020’s 33% RPS requirement. The investor-owned utilities’ aggregated forecast project they will meet the 2030 RPS requirement of 50% by 2020, the report says.

CCA projects are growing in popularity, cutting into the amount of electricity that utilities sell to customers, according to the San Francisco Chronicle. “As result, reaching the 50% renewable mandate will be easier than anticipated.”

In addition to pushing progress on renewable energy targets, the RPS has helped fuel reductions in the price of renewable electricity, the NRDC’s western energy project director Peter Miller points out. “Between 2008 and 2016, the price utilities paid for solar energy dropped 77%,” he wrote in a blog post today. “In a similar time period, the prices of wind contracts reported to the CPUC have gone down 47%.”

“So much solar power now floods the California grid from late morning through mid-afternoon that on many days, there isn’t a need for all of it,” San Francisco Chronicle reporter David R. Baker wrote recently. “But the state is still heavily reliant on conventional power plants burning natural gas, which provide the large majority of California’s electricity during late afternoons and evenings.”

A bill to set a 100% renewables mandate for 2045 was a no-go this year. However, the legislature will have a chance to take it up again in January. 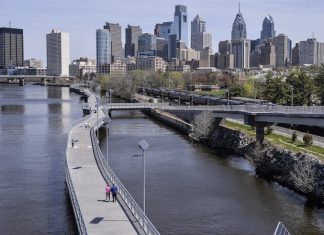 November 14, 2017
Fighting climate change isn’t easy in a country where your president doesn’t even believe that it's real. But in Philadelphia, like-minded and environmentally-conscious officials and...

All New Vehicles Will Be Electric Within 8 Years Says Stanford...