Home Wind Renewable energy a priority in next year 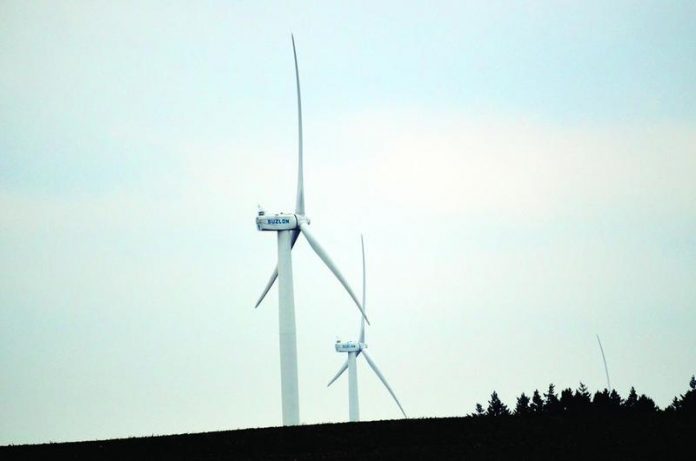 Renewable energy projects could be at the forefront of the area’s economic development agenda next year.

Wind energy and solar power companies have made their interest in the area known for many years, but as is usually the case, getting from the conceptual stage to construction has been a long and difficult process.

The Green River Wind Farm project was started 8 years ago, and several changes have been made along the way.

Initial plans for the Green River Wind Farm had included Lee, Whiteside and Bureau counties, but most of the turbines are set to go up in Lee County. The Bureau County turbines became part of the Walnut Ridge Wind Farm, and only 4 of the 66 turbines will be in Whiteside County.

“The power companies don’t like having too many of these stations, so BHE and Geronimo would both be using this one,” Whiteside County Board Chairman Jim Duffy said.

Geronimo Energy has given the Whiteside County Board some tentative timetables on its Green River Wind Farm plans. The company recently sent representatives to update the county’s Public Works committee.

The company said a full building permit application and road-use agreement will be presented at the committee’s next meeting in December. If all goes according to plan, Geronimo plans to start construction meetings in February or March. The turbines would start going up in July, the switch yard operational by September, and everything would be connected to the grid in October or November.

The building permits are the next order of business in Lee and Whiteside counties. All of the conditions for getting the county boards’ approval is spelled out in the special-use permits.

“Some of the big things are that they have to have the road agreement in place, keep the project a half-mile from Greg Wahl’s property, and they are required to hire an outside engineer to make sure everything is done the way it should be,” Duffy said.

According to the Whiteside County special-use permit, the road agreement must include proof of approved entrances to the facility. The county’s highway engineer and the Hahnaman Township road commissioner are to help draw up the pact.

Three turbines were scrapped to keep the project within the agreed-upon distance of Wahl’s 22 miles of prairie. Wahl had been concerned that the turbines would disturb the natural habitat of threatened species on the property.

Duffy said there had been little movement on the project that involved the County Board, but activity is picking up.

“We’re getting close to asking the board for the building permit approval,” Duffy said.

Bureau County granted building permits in August that allowed BHE Renewables to start construction on its Walnut Ridge Wind Farm. Permits are needed for each turbine, and 116 will be built on 14,000 acres that include parts of Ohio and Walnut, and Greenville, Manlius and Bureau townships.

As is often the case with wind projects, lawsuits have presented another construction hurdle. Separate lawsuits filed against Lee and Whiteside counties several years ago are ongoing. In the lawsuits, citizens contend that the wind farm is incompatible with surrounding land uses and that special-use permits should not have been awarded to the companies.

The company, however, has continually maintained that litigation can be handled while still moving ahead with construction plans.

Several solar energy companies have shown an interest in the area for many years. County officials have put solar guidelines on the books, anticipating that a deal could soon be finalized.

Areas that are being shopped include about 80 acres at the county landfill site in Morrison, 40 acres at the former Stanley building just outside of Rock Falls, and some acreage at the Whiteside County Airport.

“We’re hoping to take advantage of the interest shown here for solar energy production,” said Gary Camarano, Whiteside County economic development director. “This allows us to take unproductive assets and generate some money for the county.”

Historically, Cypress Creek Renewables, Dedicated Community Solar Energy, and Silver Farms have been among the companies that have had the area on their radar for new projects.

One business has been serious about setting up a leasing arrangement in Whiteside County, but Camarano said it was too soon to reveal the partner.

“The potential for our region in renewable energy is enormous, and it’s something we have to tap into,” Camarano said.

At a time when solar power-related jobs were up 20 percent nationwide, Illinois lost about 300 jobs in the industry last year. Solar jobs, that on average start at $21 an hour, have grown nationally at a 123 percent rate since 2010, according to the Solar Foundation. May 30, 2017
Often times, the best way to spur new growth in an industry is to use technology to do something truly remarkable. Just ask NASA;...