U.S. Senator Bill Nelson introduced legislation this week that could further expand the solar industry in Florida by allowing banks to invest heavily in the renewable energy sector, a financial move which is currently banned under Federal Deposit Insurance Corporation regulation.

Under the Bank Holding Company Act of 1956, bank holding companies (BHCs) may invest in businesses engaged in non-banking activities, but are limited in the amount of outstanding stock they can control. Currently, BHCs are only allowed to control up to 5 percent of any non-banking company.

Florida’s senior senator wants to increase that amount up to 20 percent for companies that engage solely in the production or storage of renewable energy, a stimulus for BHCs that could potentially flood the renewable energy sector with capital needed to expand.

“Florida is the nation’s Sunshine State but ranks twelfth when it comes to solar production,” Nelson said in a press release Monday. “That needs to change.”

Nelson’s ranking of Florida’s solar production is a generous one at that. The Portland-based commercial research company Solar Power Rocks ranked Florida No. 26 overall in its 2017 U.S. Solar Power Rankings.

A total of 11 policy and incentive factors are used in the ranking of each state. Some of the factors include electricity cost, net metering, rebates and performance payments. Florida scored low on all weighed factors except for net metering and tax exemptions.

According to Nelson, allowing BHCs to invest more freely in the relatively untapped marketplace would make it easier for those financial institutions to offer financing to homeowners for the instillation of rooftop solar power systems.

Pricing for the instillation of a rooftop solar power system varies widely from state-to-state, but the average homeowner can expect to pay upwards of $21,000 before tax credits, according to HomeAdvisor. Banks have been hesitant to approve loans for such homestead modifications, giving rise to third-party financing via solar power purchase agreements.

Nelson says his “Green Banking Act” would direct the Federal House Finance Agency (FHFA) to create uniform underwriting standards that banks owned by BHCs could use in the offering of loans to homeowners looking to go green.

The legislation includes a provision which would require the director of the FDIC to conduct a review to help identify ways to increase the “financing for residential solar energy system property improvements in underserved markets, including examining current obstacles to such financing.”

The renewable energy sector consisted of more than 650,000 workers in 2016, according to a U.S. Department of Energy report, more than both the coal and natural gas electric generation industries combined.

Moreover, approximately 373,800 Americans worked at least part-time to manufacture, install, distribute or provide professional services to solar (photovoltaic) technologies in the first quarter of 2016. Solar power employers reported in 2016 that they expected employment to increase by 7 percent over the next year, according to the DOE report.

While a large portion of the solar energy produced in the U.S. is considered utility-scale – either owned or operated by utility companies – over half of the nation’s solar energy workforce was spending a majority of its time working on residential solar projects in 2016, according to the report.

However, most of those solar energy jobs exist outside of Florida, according to recent findings.

A BW Research Partnership report sponsored by the Florida Alliance for Renewable Energy (FARE) estimated that there were roughly 14,000 “clean energy” businesses in the State of Florida in 2014. Those businesses employed approximately 130,000 Floridians, of which only about 11,000 worked in the renewable energy sector.

“This bill will make it easier for homeowners to invest in their own solar installations while, at the same time, making it easier for larger renewable energy companies to access the capital they need to expand and create more jobs in Florida,” Nelson said.

Nelson’s bill was read twice in the Senate on Monday and referred to the Committee on Banking, Housing and Urban Affairs. The committee has yet to be announce a date when it will review the legislation. 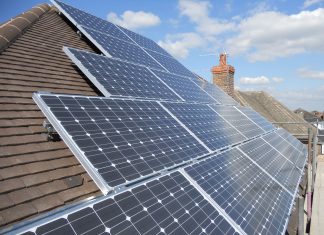 June 1, 2017
The skies above the United Kingdom made for not only a beautiful day last Friday, but also record breaking performance for solar generation. It is...