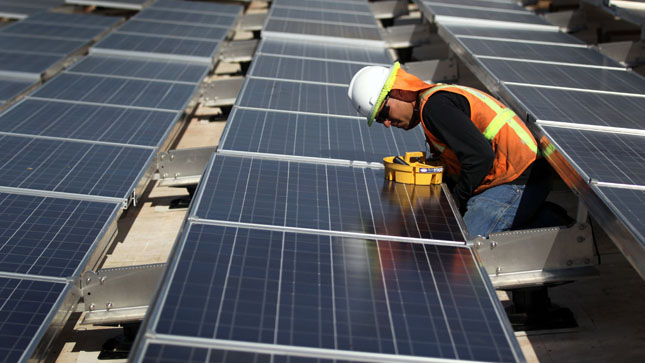 As Congress debates tax reform, which may include provisions to hobble investment in wind and solar power generation, it is critical that when discussing renewable energy, American consumers are not forgotten. Specifically, bad actors in the rooftop solar industry must not be allowed to continue to abuse and mislead customers who are considering spending as much as $20,000 to install solar panels on their homes.

Consumer watchdog Public Citizen began questioning the arbitration clauses included in rooftop solar contracts. The group warned that solar leasing arrangements pose “significant financial risks for families.” The National Consumer Law Center also weighed in, urging the Consumer Financial Protection Bureau (CFPB) to protect low-income consumers citing, among other things, a dramatic increase in leases for solar panels “and extensive complaints of false claims as to the savings with such panels and the terms of the leases.”

Over the last year, my organization, Campaign for Accountability, has filed numerous open records requests at both the federal and state levels, to discover what Americans have told regulatory and consumer advocacy agencies about their rooftop solar panels. After reviewing myriad consumer complaints, there are some things Congress, regulatory agencies and state attorneys general across the nation should consider:

First, among the companies receiving high numbers of customer complaints, two companies in particular stand out: Vivint and SolarCity. Complaints against these two — among the largest providers — constituted nearly 56 percent of all the complaints filed with the Federal Trade Commission about solar companies. Among other things, consumers reported being tricked into buying or leasing solar panels and ending up with increased, rather than lower, utility bills. SolarCity is now owned by Tesla, billionaire Elon Musk’s company.

Vivint has a dubious track record. In fact, the company’s home security division, now a separate company from Vivint Solar, has reached multiple settlements with state attorneys general for misleading consumers. The Better Business Bureau, which has not accredited Vivint, has received 522 complaints against the company since 2015.

Second, many of the consumer complaints we reviewed shared similar themes. Among the more common complaints: these companies provided poor or inadequate service, falsely represented the savings the customers would realize from solar power, lured them in with low price quotes that later proved to be false, required them to sign confusing contracts, and/or performed shoddy installation of the solar panels.

Customers of Vivint Solar, for instance, complained to the California attorney general about the company’s false promises and misleading sales offers. One reported being promised savings of 20 to 30 percent on their electric bill, but after solar panels were installed, the bill actually increased by 80 percent the first month and 100 percent the second month.

Another Vivint customer complained of signing up for solar energy under false pretenses after the company misrepresented itself as affiliated with a utility company. The consumer sought unsuccessfully to have the solar panels removed, but the company stopped returning her calls.

Third, the rooftop solar industry may be using a front group to push its agenda and influence policymakers and the media. In June, Campaign for Accountability published a report exposing the Energy and Policy Institute — an organization that describes itself as both a watchdog and a think tank — as the apparent project of a for-profit public relations firm.

Campaign for Accountability found that institute, which claims it “exposes attacks on clean-energy,” is just as secretive as the organizations it claims to expose: the institute does not disclose its annual tax return; it has no an address beyond a post office box; its few employees appear to be scattered across the country; it is not registered with any relevant Secretary of State’s office; and it does not release the names of any board members.

The unfortunate reality of government action is that regulators are slow to react to new and emerging technologies. As rooftop solar has grown dramatically, so have the deceptive schemes and bad actors shilling for it. Federal and state regulatory and consumer protection agencies should consider how they can better protect consumers from bad actors in the industry. Simply put, just because we support using rooftop solar to reduce greenhouse gas production, doesn’t mean we should turn a blind-eye to shady business practices that hurt real Americans.

Daniel Stevens is the executive director of the Campaign For Accountability. December 18, 2017
During the daytime, the ADO The Hague football stadium generates its own energy from solar panels on its roof. This energy is mostly needed...