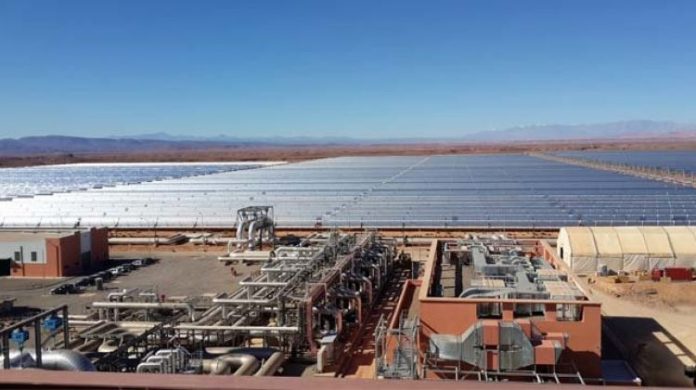 The two solar plants will be connected to the national grid and will guarantee electricity supply to more than two million Moroccans within the country. Image: African Development Bank

In conjunction with its New Deal on Energy for Africa, the African Development Bank (AfDB) has committed US$324 million in loan support for a pair of renewable projects in Africa, setting aside US$265 million for an 800MW PV and CSP hybrid project in Morocco.
In Morocco, the Bank’s commitment will help develop the CSP project, which is comprised of two solar plants (NOORM I and NOORM II) that will have a combined generation capacity of 800MW under a public-private partnership. It is not clear how much of the capacity will be allocated to solar PV.
The two solar plants will be connected to the national grid and will guarantee electricity supply to more than two million Moroccans within the country — representing approximately 6% of the country’s population.
Akinwumi Adesina, president of the African Development Bank, said: “These approvals demonstrate once again the Bank’s leadership on renewable energy in Africa. These projects will be essential to achieving the countries’ Nationally Determined Contributions (NDCs) under the Paris Agreement. I believe this sends a strong message ahead of the One Planet Summit on Climate next week in Paris”.
The Bank also announced US$59 million loan support for a 44MW hydropower plant on the Bandama River in  Côte d’Ivoire.
The Bank’s New Deal on Energy for Africa is a partnership-driven measure with the goal of achieving universal access to energy in Africa by 2025. June 23, 2017
In an interesting development, sources in the music industry say that Tesla is currently talking with major labels about creating a proprietary music service...