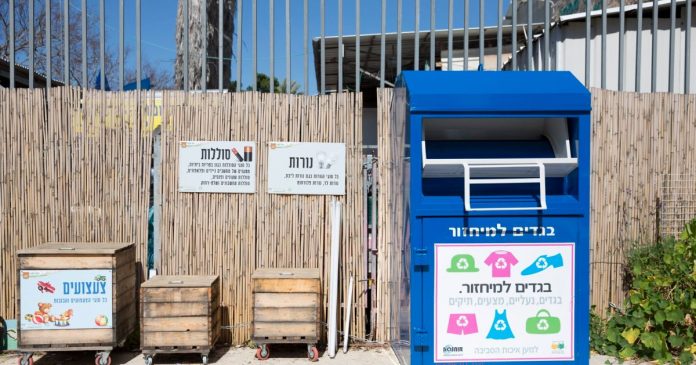 In the central Israeli town of Kfar Sava, a team meets every few weeks at city hall to discuss a utopian-sounding project to recycle nearly all of the city’s garbage. In Eilat, 350 kilometers to the southeast, officials are working to harness solar energy for all of the city’s electricity demands. Carrying out these projects requires environmental awareness, but the driving force is largely necessity.

Local governments want to cut their spending on electricity and waste collection while addressing environmental hazards that affect residents’ quality of life. Officials have learned that there’s no point waiting for the national government to meet its promises on the environmental front, which include the establishment of waste sorting and recycling facilities.

“In our discussions, we refer to waste as a resource and consider how to exploit it,” Tzahar says.

The plan is based in part on programs that are already in place, such as sending electronic waste to an innovative recycling plant for that purpose in the nearby Barkan Industrial Zone, in the West Bank. Kfar Sava hopes to increase the volume of old computers and other hardware that goes to the plant. It also seeks to partner with other communities on waste disposal, a move encouraged by the Environmental Protection Ministry. Kfar Sava is working with the Emek Hefer Regional Council, to the north, which has a biogas plant that converts organic waste into electricity.

Construction waste is a problem for most cities, where it is often dumped illegally in open areas near residential and commercial building projects. The Environmental Protection Ministry has promised to propose new legislation tackle the issue but for now, the waste is piling up.

The large southern central town of Rishon Letzion has tapped a private company, Negev Ecology, to establish a recycling center for building waste. The city plans to lease dumpsters at a discount to home owners planning renovation work, to guarantee that the waste goes to the recycling facility. Kfar Sava has a similar plan and also intends to install recycling stations for smaller amounts of construction waste.

In Eilat and nearby communities in the Arava, the area’s plentiful sunshine is the focus of environmental efforts. “Our plan is to attain energy independence, in which the city generates all the electricity that it consumes, within five years,” Eilat Deputy Mayor Eli Lankri says. “It will be done in cooperation with [other] Arava communities. We already generate 75 percent of the required daytime electricity from solar energy at facilities on our land and that of Arava communities.”

The project is being carried out in partnership with the nonprofit organization Eilat-Eilot Renewable Energy, established by communities north of the city. The electricity generated through the project is currently directed to the national electricity grid, which has a limited capacity to absorb it.

One solutions that Eilat-Eilot and the city of Eilat are undertaking is a facility Arava with two pools of different heights. Water will be pumped to the higher pool during the day using solar power. At night, the water will flow to the lower pool and generate electricity through turbines, giving the region independence from the national grid.

The coordinator of Eilat’s “smart city” program, Elad Topel, said the city is also drafting a municipal bylaw requiring every new neighborhood to have infrastructure for solar panels on the roofs of homes.צפר

Kfar Sava is also expanding the use of solar energy. Solar panels have been installed on the roofs of public buildings and recently it launched a project called New Under the Sun, designed to help apartment owners overcome the reluctance of fellow tenants to paying for solar panels. “Through the municipal economic corporation, we are offering every resident support in the process,” said Ella Danon, the director of the city’s sustainability department.

For kibbutzim in the Eilat area, renewable energy takes them full circle. In the 2000s, residents saw the removal of fish breeding cages in that Gulf of Eilat, which generated a lot of money for the kibbutzim but posed ecological hazards to the gulf. In recent years, the solar energy industry has managed to provide both an income stream and employment of similar dimensions and it has also been an asset to the environment.

For its part, Tel Aviv is for the first time planning a neighborhood with natural-gas pipelines. The neighborhood, which will replace the city’s Sde Dov airport, will have underground power plants that use natural gas. The gas will not only generate electricity but also heat water.

Dr. Orli Ronen, the head of the Urban Innovation and Sustainability Lab at Tel Aviv University’s Porter School of Environmental and Social Studies, is not surprised by the recent developments. “Cities in Israel understand that they too, not just private businesses, can generate revenue and to do that, they also need to be involved with innovation and research.”