Democratic Socialist candidate for the House of Representatives Alexandria Ocasio-Cortez said in a video that reaching the goal of 100 percent renewable energy to fight climate change requires the same urgency and mobilization in the United States as it did to fight Nazi Germany during World War II.

“So when we talk about existential threats — the last time we had a really major existential threat in this country was around World War II,” Ocasio said in a video filmed at an undated campaign at an unknown location.

“And so we’ve been here before, so we have a blueprint of doing this before,” Ocasio-Cortez said. “None of these things are new ideas.”

“We have to do the same thing if we’re going to get us to 100 percent renewable energy,” Ocasio-Cortez said. “And that’s just the truth of it.”

“But the fact of the matter is we’re dealing with a radical truth and a radical reality and the more that we choose to ignore it the worse we are doing for our children and our grandchildren and frankly ourselves,” Ocasio-Cortez said.

Although that victory marks the start of Ocasio-Cortez ’s political career, she is not a newcomer to activism, having volunteered for Sen. Bernie Sanders (I-VT) in his 2016 presidential campaign. 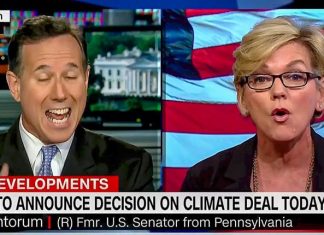 June 1, 2017
Rick Santorum, 2016 Republican Presidential candidate and former Senator from the state of Pennsylvania, believes solar power is not reliable. Thursday morning on the CNN...